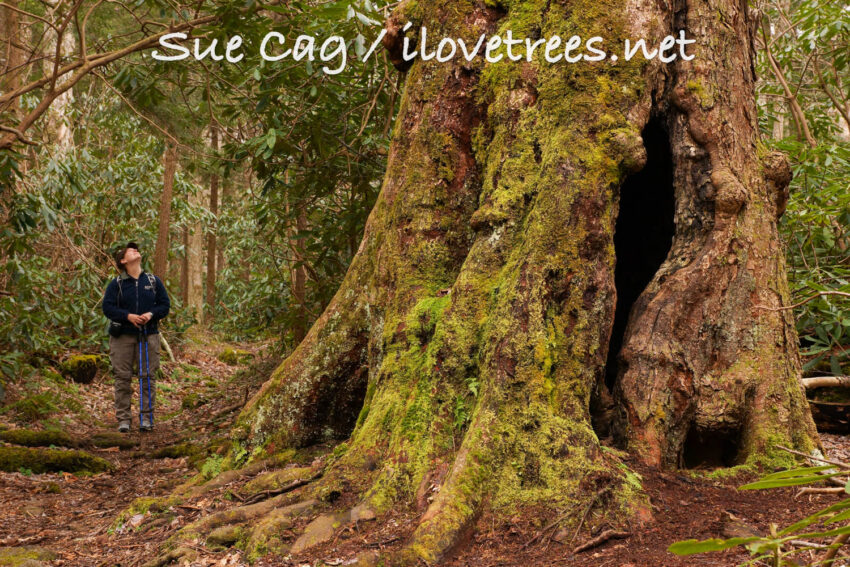 All day the wind rushed in viciously, loudly. It came in bursts and then stopped, blowing small branches to the forest floor that held flowers, fresh leaves, and lichen I wouldn’t have seen otherwise. It drizzled at times too, but never for very long. At one point it sleeted for a few minutes. The air changed from warm to cold to warm again. I relished this genuine mountain experience as I walked the three miles uphill to the Albright Grove.

I wasn’t sure what to expect on this trail since the Smokies have been almost completely logged. I heard there was old growth up here, but I’ve gone searching for old growth before only to find someone else’s inaccurate version of it. I’ve also experienced many places where the trees are sparse or there are only single survivors here and there. I thought this might be one of those places and sure enough, most of the way up the trail ran along a road bed in an area that had obviously been logged and settled in the past. At one point there was a huge swath of all-the-same-age tulip trees. I spotted a few beautiful old oaks along the road that had been spared. And then, after the trail narrowed, things started to change dramatically for the better.

I noticed plentiful wildflowers, violets, trillium, chickweed, rue anemone, and wild mint. Ferns and mosses covered tree bases and roots. The tulip trees started getting larger, the forest more diverse. A giant hemlock appeared beside the trail with one of the widest bases I’d ever seen, with needled branches full and strong despite the woolly adelgid taking most of her friends. Huge tulip trees could be spotted through the thick rhododendron and the trail soon moved through a grove of them, the ground became a bed of wildflowers, giving the scene a magical feel.

Fraser’s sedge and trout lily appeared as I continued up past gorgeous hemlocks and oaks. Soon a very old red maple appeared in the brambles beside the trail, with a curved oak opposite. This was a gnarly moss covered maple that twisted as it rose high above me. I love maples and this one was fantastic. Just around the curve I crossed a fun log bridge and continued up the open ridge. A huge tulip tree appeared on my left and I could see more in the distance down the ridge.

After reveling in the wonderful trees along the way, I finally reached the actual Albright Grove trail and went counter-clockwise around the loop. Club moss sprung up along the trail and the forest became more lush. Huge tulip trees towered above the rhododendron. The big trees and the deep green feel reminded me of the forests of the Pacific Northwest.

Just up the loop, I gasped at the sight of the biggest red maple I’d ever seen, right on the trail. This was completely unexpected. Here was a massive, old, partially hollow, moss-covered gnarly maple with roots stretching onto the trail, looking as big and old as a tree can get. It was stunningly gorgeous and stopped me dead in my tracks, wide-eyed and thoroughly impressed. I knew there would be some old trees up here, big ones even, but I didn’t know it’d be this good.

I continued to spot big maples, hemlocks, beech, silverbell, and tulip trees along the trail. Giants appeared all up and down the ridge as well and it was hard to tell how big they were. Luckily just as many appeared right by the trail. Huge hemlocks splintered, fell, and remained where they lay, as they should. Several hemlocks still stood, strong and thick. Maples showed off their unique bark and vivid red seeds hanging high above. A grove of baby beech trees appeared, their dried up winter leaves still hanging on, glowing pale orange against a light gray sky. Silverbells grew unusually large, covered in multicolored slate bark. Tulip trees stole the show with such a large number of big trees, wide and tall. I was in my element, spotting one great tree after another, and then another. I was surrounded by ancient trees and it was paradise.

Most of the way through the loop going counter-clockwise I came across a gigantic snag. I climbed below for a better view and saw that the snag was bigger than I thought. When this giant was alive, I think it would have been bigger than any other tree I’ve seen in the east. It was full of character too, bark-less with exposed, descending curves in the wood, plus cracks and openings and moss in places. The snag reminded me of an ancient western red cedar with worn away bark and lava-like curves. What kind of tree was this? I couldn’t tell. Maybe it used to be a tulip tree because they could potentially grow this big here, at least 30 feet in diameter.

The Albright Grove was an impressive loop of tree-lover splendor, full of old trees, big trees, moss, ferns, wildflowers, snags, and lush diversity. The forest felt open and dense at the same time. Hooded warblers flew across the trail. Nuthatches ran down tree trunks. The sun emerged on my way back down after I crossed Indian Camp Creek. The rays shot out behind the huge hemlock I had admired on the way up, then again through the open tulip tree grove. I stopped only to admire a fallen branch of unopened flowers and a pitch pine limb. I descended the mountain feeling alive, enriched, and truly impressed.

Note: I’m not a fan of Great Smoky Mountains National Park because it’s ridiculously crowded. I was delighted to find out that not too many people hike the Albright Grove trail. I was a little worried when I arrived and five cars were at the gate, but then I remembered the crazy overflowing parking lots at other trailheads. And it actually turned out that most of the cars belonged to a single loud group that I thankfully passed on my way up as they were leaving. I only saw four other quiet hikers on a Thursday in April. No screaming kids. Maybe it’s the strange trailhead location or the fact that it was a weekday. I don’t know if it’s always like this (perhaps not in the summer), but this was my kind of trail. 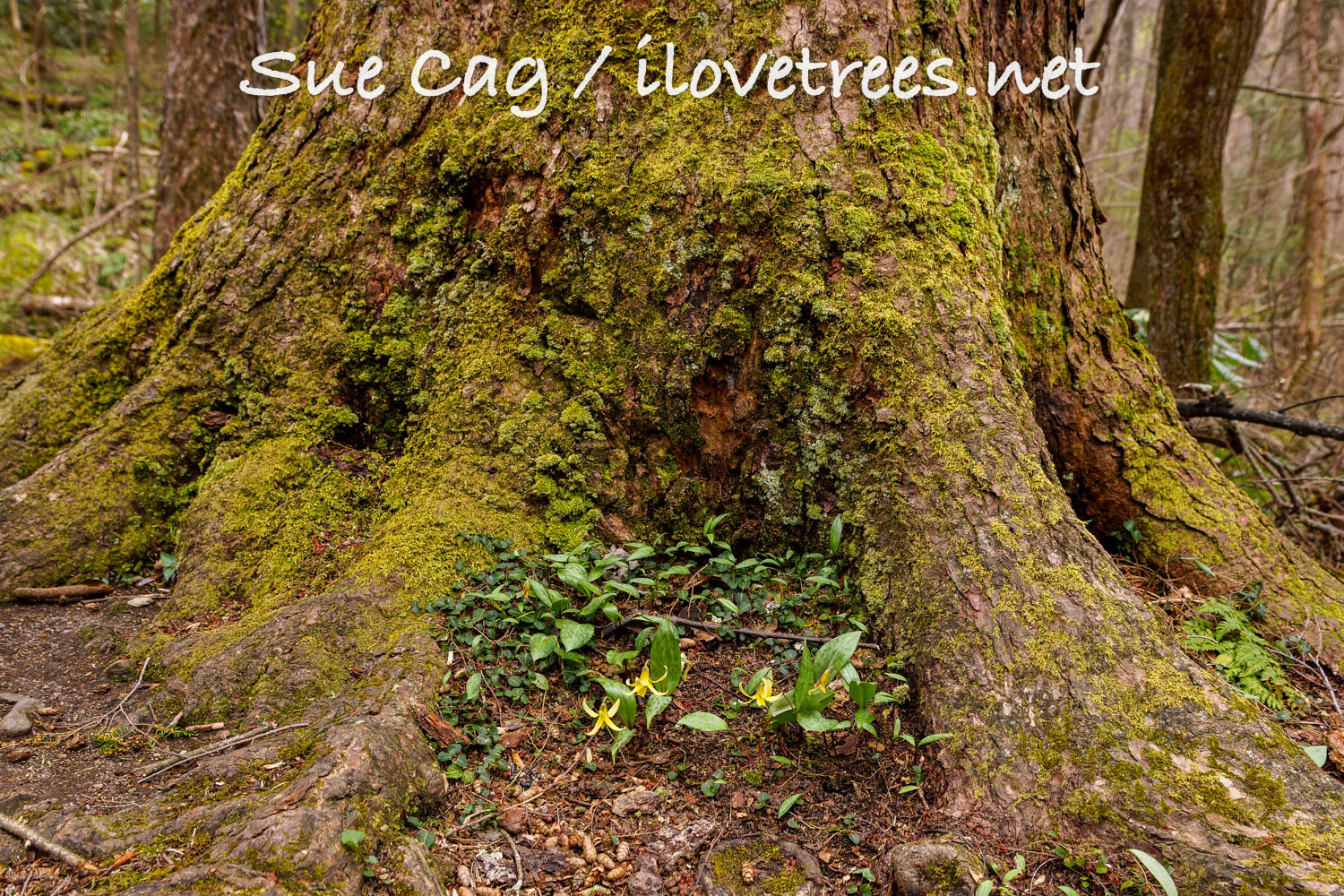 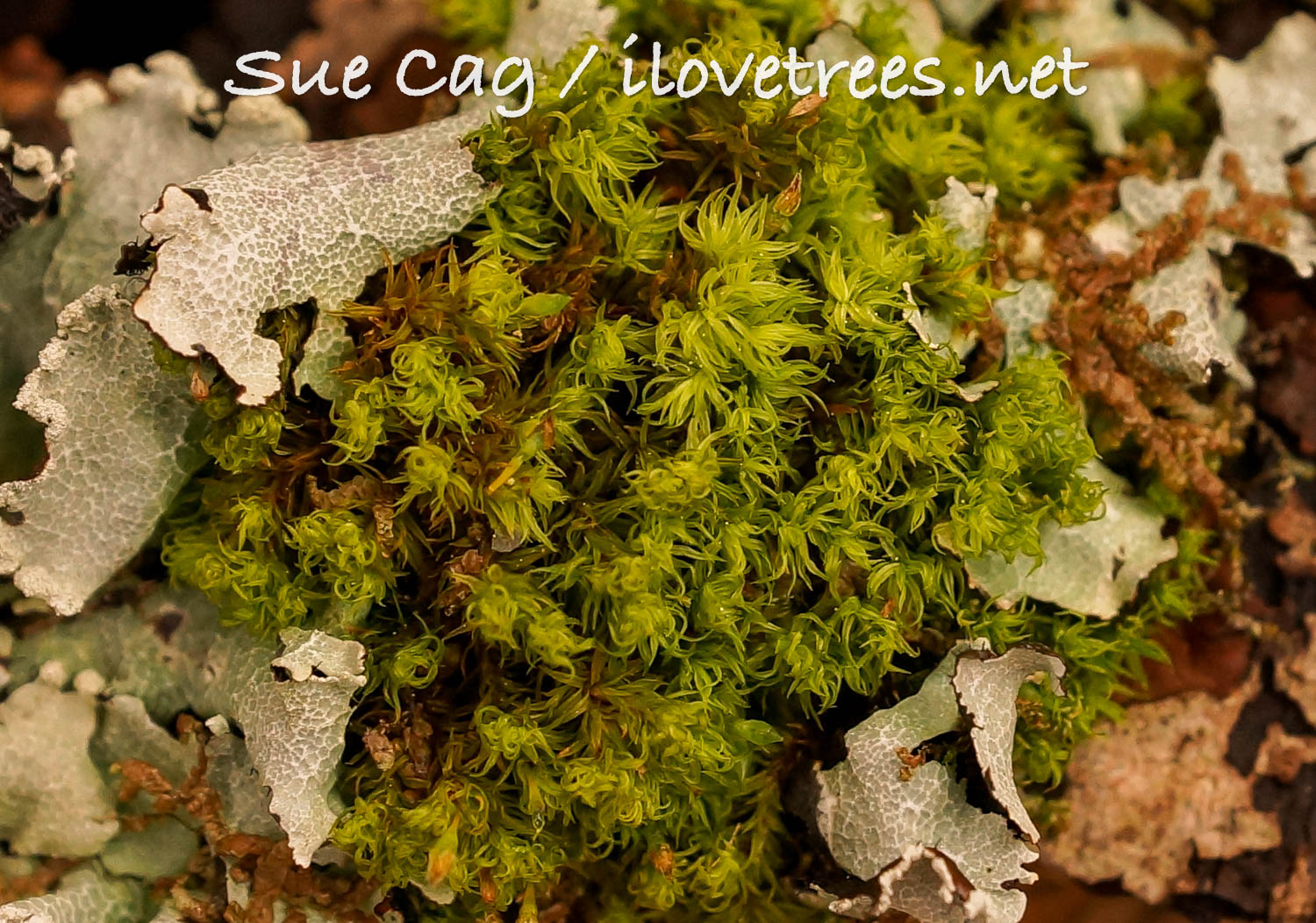 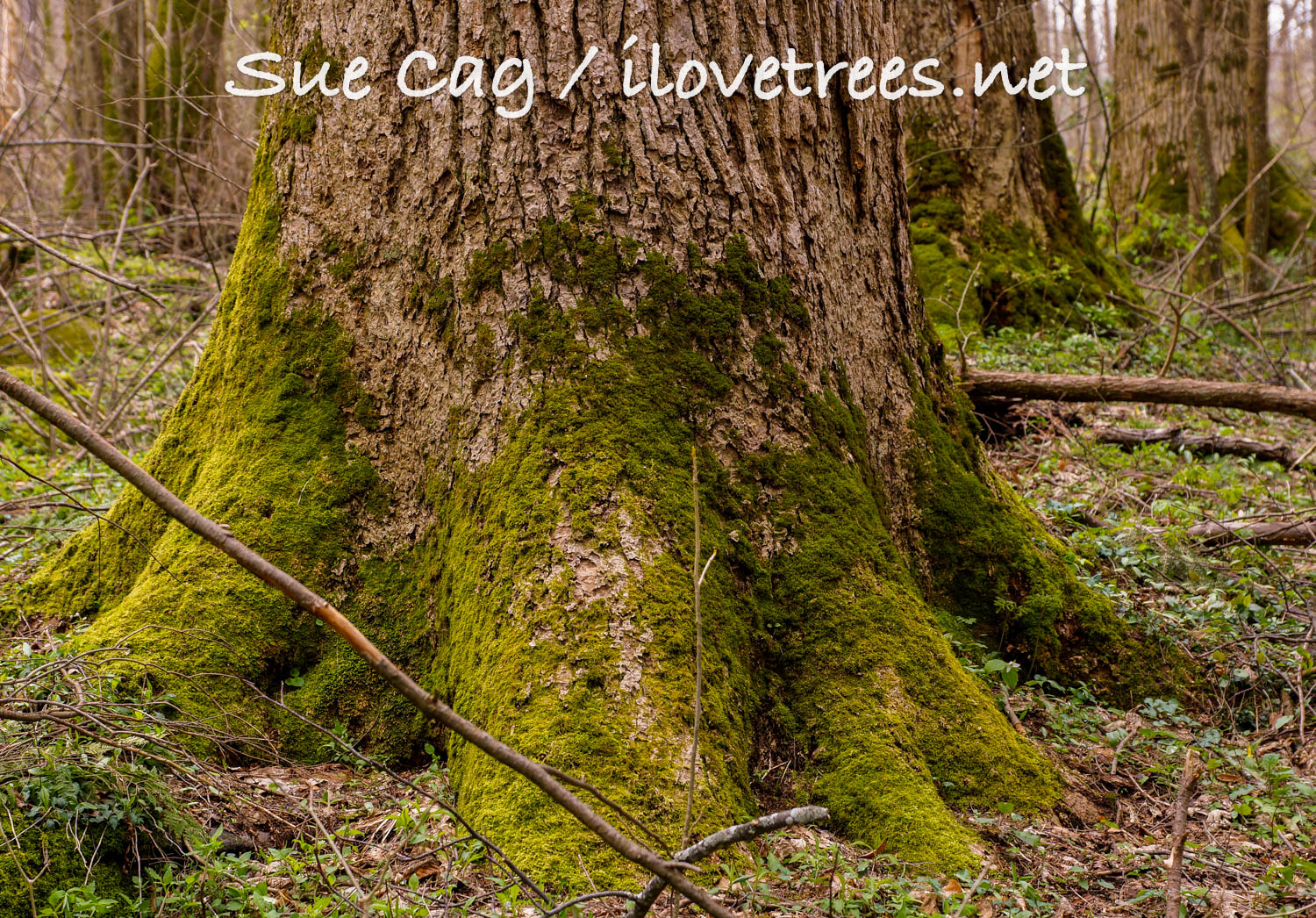 Sentinels in the Mist: A Walk Through the Coast Redwoods
I don't know where to loo...
University Woods
On the southeastern side ...
Sequoia National Park
I have visited Sequoia Na...
Forgotten Grove: A Tale of Two Sequoias
There's no easy way to ge...
A Springtime Stroll in Brunswick Nature Park
I've never successfully s...
Greenfield Lake
A great blue heron tiptoe...