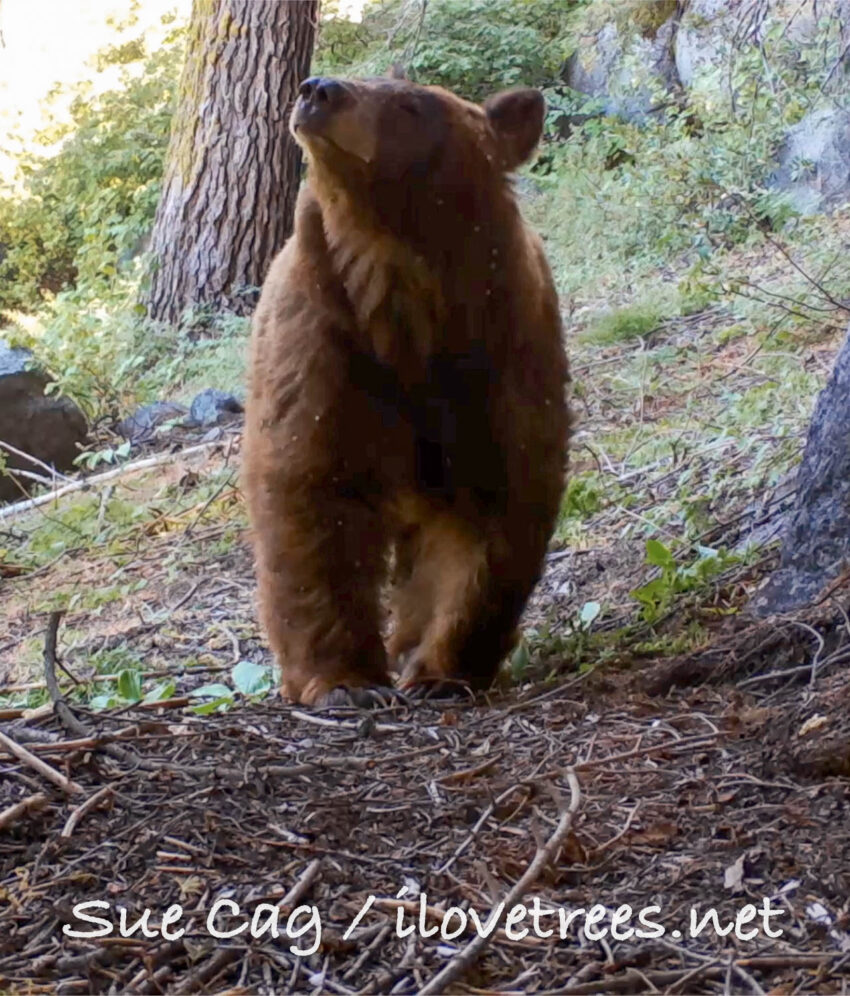 Last summer we spied on the bears roaming the sequoia forest and got to know them as individuals. First, we nearly ran into a medium-sized bear with a shiny black coat and notched right ear. We had paused to look at a tree when she came slowly sauntering along, sniffing the ground and checking out stumps, completely unaware of our presence. Her forehead looked a little tattered and scarred. Her gentle brown eyes squinted in the sun and her mouth hung slightly open in the heat. We backed away to give her plenty of space, but as soon as she got wind of us, she tore off into the woods.

We decided to place a wildlife camera out in the forest. During the first week we caught a large mother bear with reddish-brown fur. At first she just walked by, but then she tore down the camera and gave it a beating on the ground. Repeatedly. Apparently this is a common thing for bears to do and no one knows exactly why. I don’t blame her at all, since this is her space, not mine.


The reddish-brown bear was sometimes accompanied by two smaller bears, which we assumed were her offspring. Sometimes the two small brown bears appeared by themselves. We watched them disappear into thickets of bitter cherry, shaking the branches and falling over inside the dense shrubs. They also climbed up into white fir trees, their faces just barely visible through the foliage. We often saw them ambling up the slopes of Jordan. They frequented the rock escarpments and red fir trees below the peak. 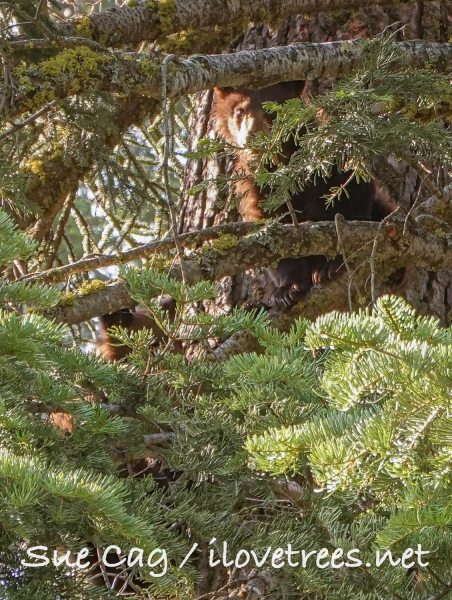 Lastly, the wildlife camera occasionally caught an elusive dark brown bear with light tan patches on his back and rear. This was the bear I would later see escaping the fire.

On September 13th, 2020, the SQF Complex / Castle Fire ripped across Jordan Peak and came downhill over the boulders, shrubs, and forest where the bears live. Our home burned down, and theirs did too. On that fateful morning, I watched the angry wind and amber sky through the security cameras attached to our house, up until the power cut out. Flames appeared on the opposite side of the street just before losing signal.

One hour before our home burned down, the tan-patched bear walked through our side yard, across our driveway, and down the street. He was moving downhill away from the fire. This bear lived a couple miles up the mountain. I never saw a bear at the house or anywhere close (and we were careful not to attract wildlife). What do bears do when there’s a fire? Now, we know.

I wonder if the others made it. What if they went the wrong way or got caught in the middle of it? I’ve walked to almost all corners of these woods since the fire and I haven’t found any evidence. I’ve only stumbled across one animal corpse, that of a Douglas squirrel lying in the ash.

Then one day in January when I was surveying the western edge of the grove, I saw movement below one of the sequoias I was documenting. I stood uphill as a very sleepy black bear stood at the entrance to a fire cavern below a giant sequoia. It was the black-coated bear with the notched right ear.

The sides of the sequoia were thoroughly scratched up, burnt black bark torn off to reveal the unique amber fuzz of a sequoia. I was standing at a good distance uphill, backlit by the sun. She tried to look up, her eyes blinking like anyone coming out from darkness into light. She thought for a few minutes as I stood still trying not to disturb her. Then she decided to wander off downslope. After she was long gone, I took a closer look at the sequoia. Inside was a nice soft oval bed of red bark shreds set deep into the large cavern. I wondered how she got the bark into the cave, by front paws, back paws, or by mouth? Clearly she had been hibernating. As she left I noticed many red pieces of her bed sticking to her black fur.

The giant sequoia she had chosen was dead. All of the sequoias in the area are dead, killed by the severe burn that turned them into standing skeletons. This was one of the largest around, with a flared base and huge branches still clinging on above.

A few days later, we received two feet of snow. I think about her sleeping inside her cavern. I worry about her not having enough to eat when she occasionally wakes for a snack. The shrubs are all gone. There isn’t anything green in the burnt area. Why didn’t she choose an area that the fire missed farther up the mountain? Is there now two feet of snow blocking her doorway?

Does she know what happened to the others? 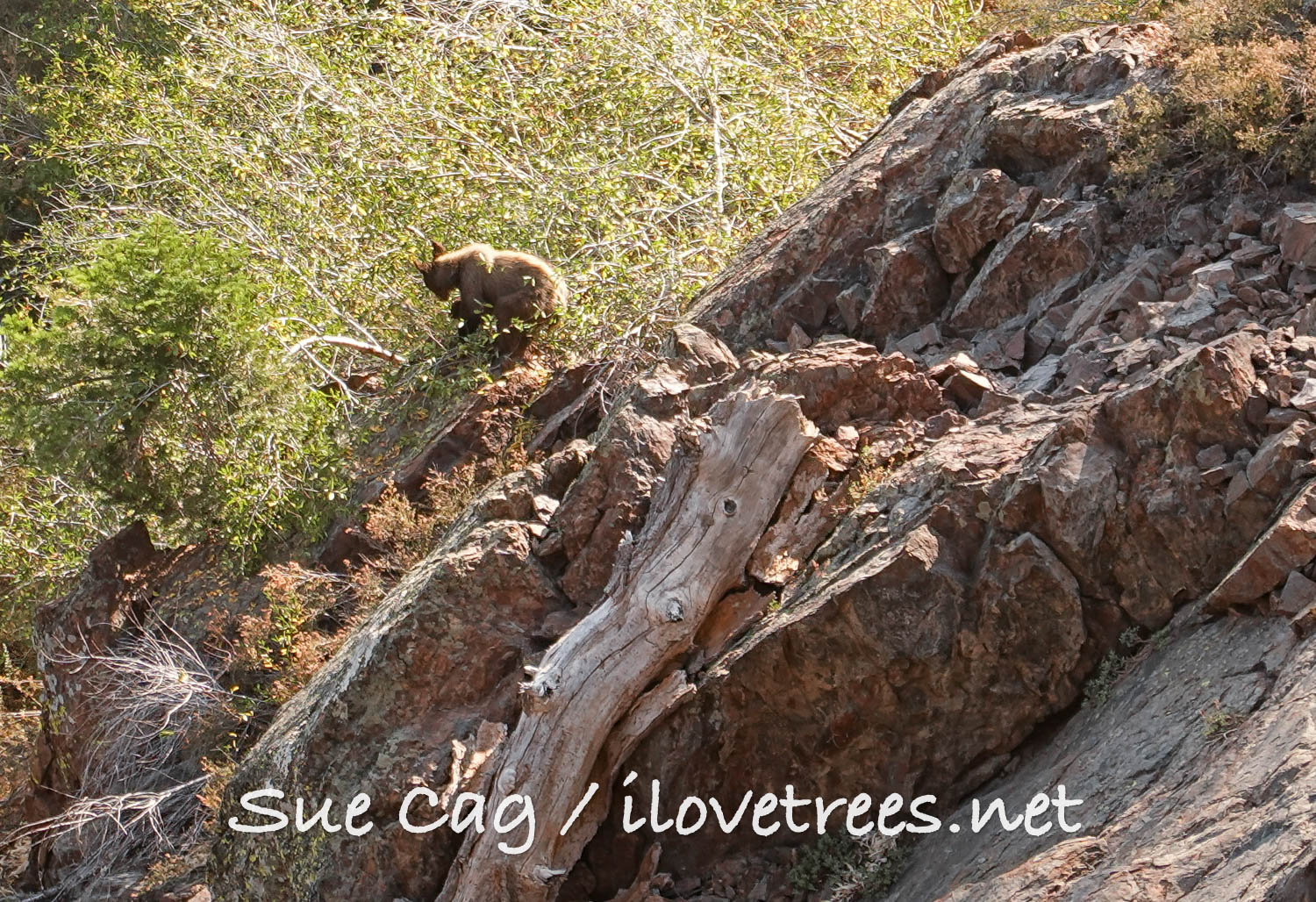 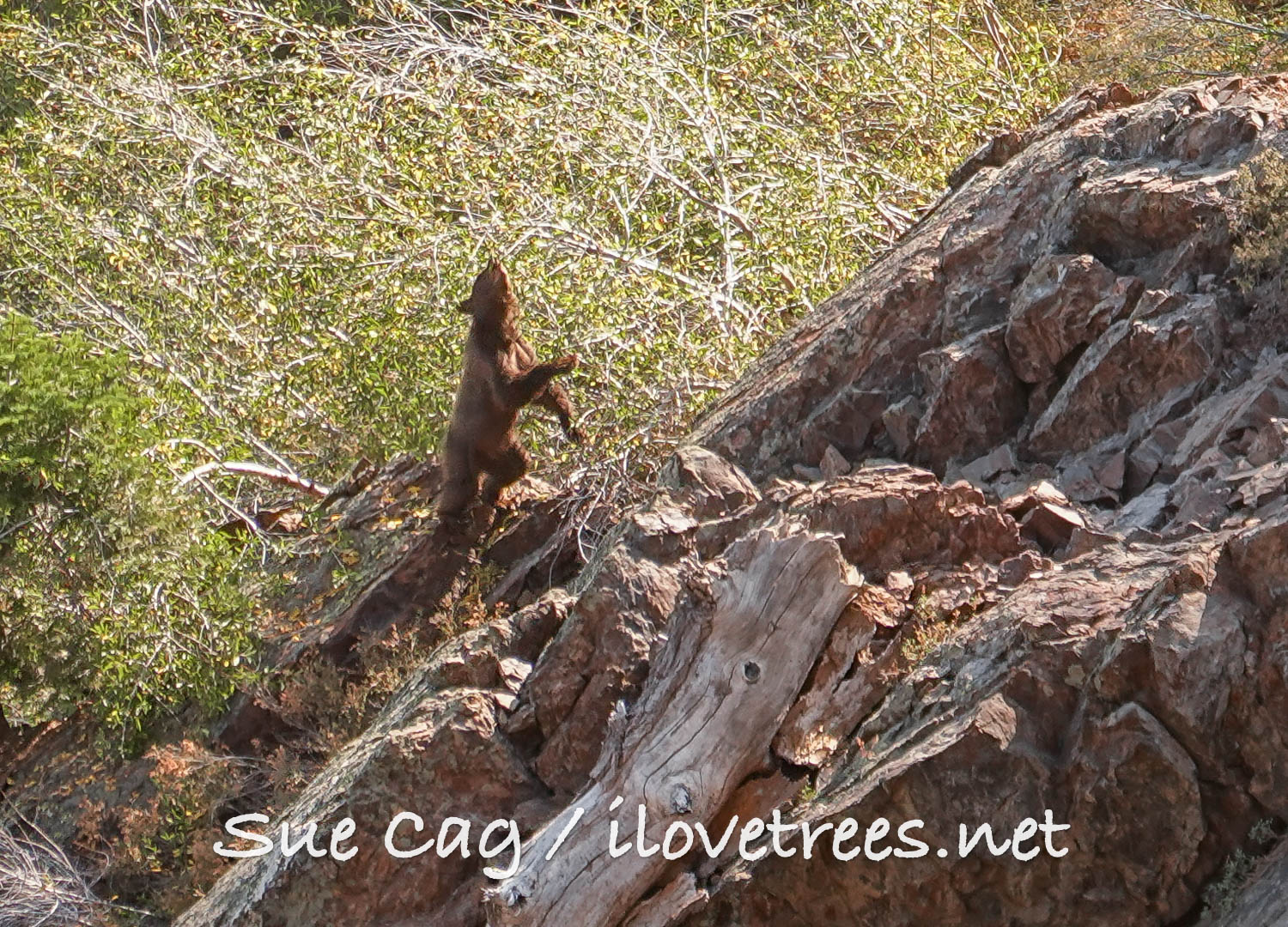 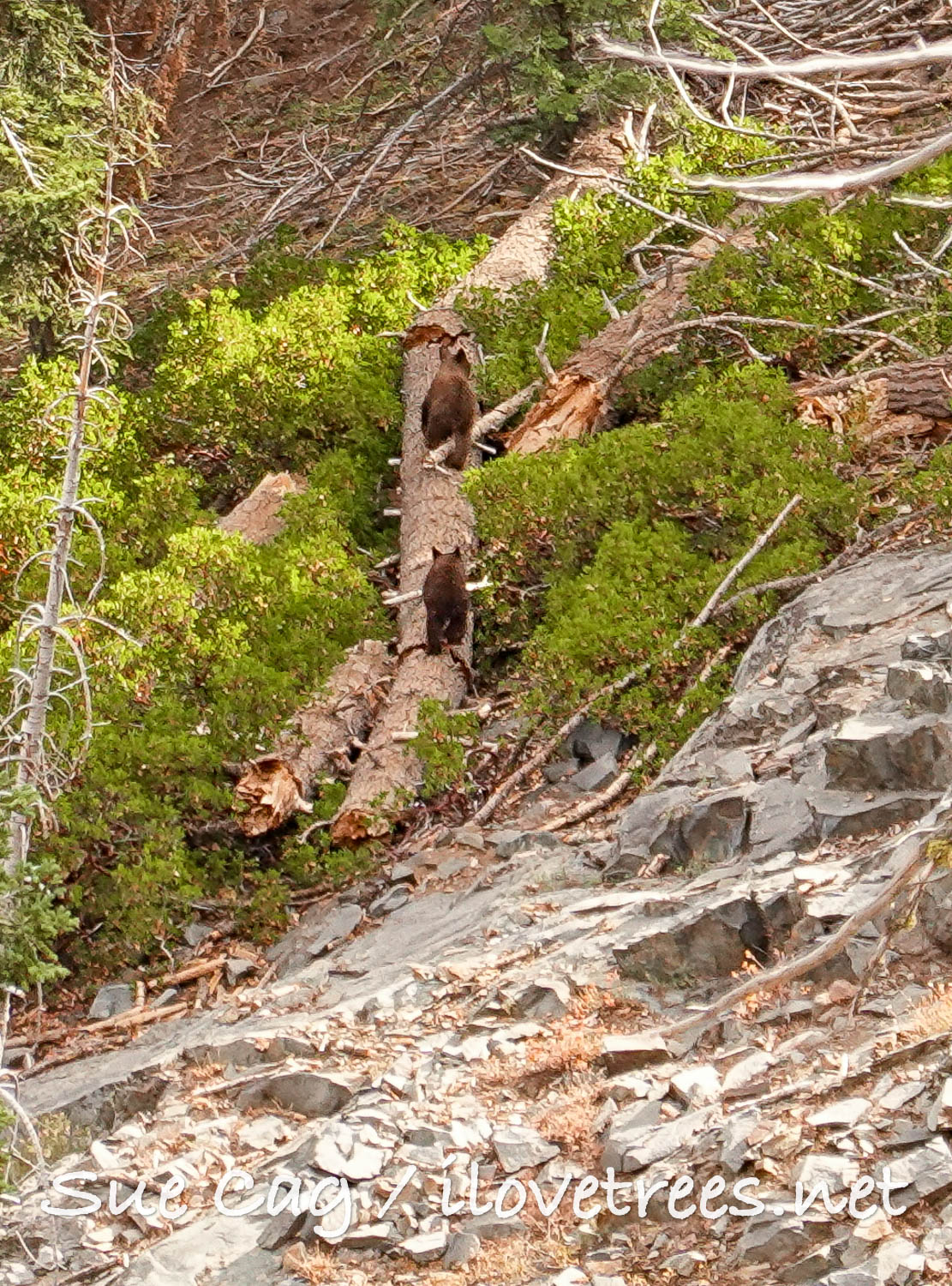 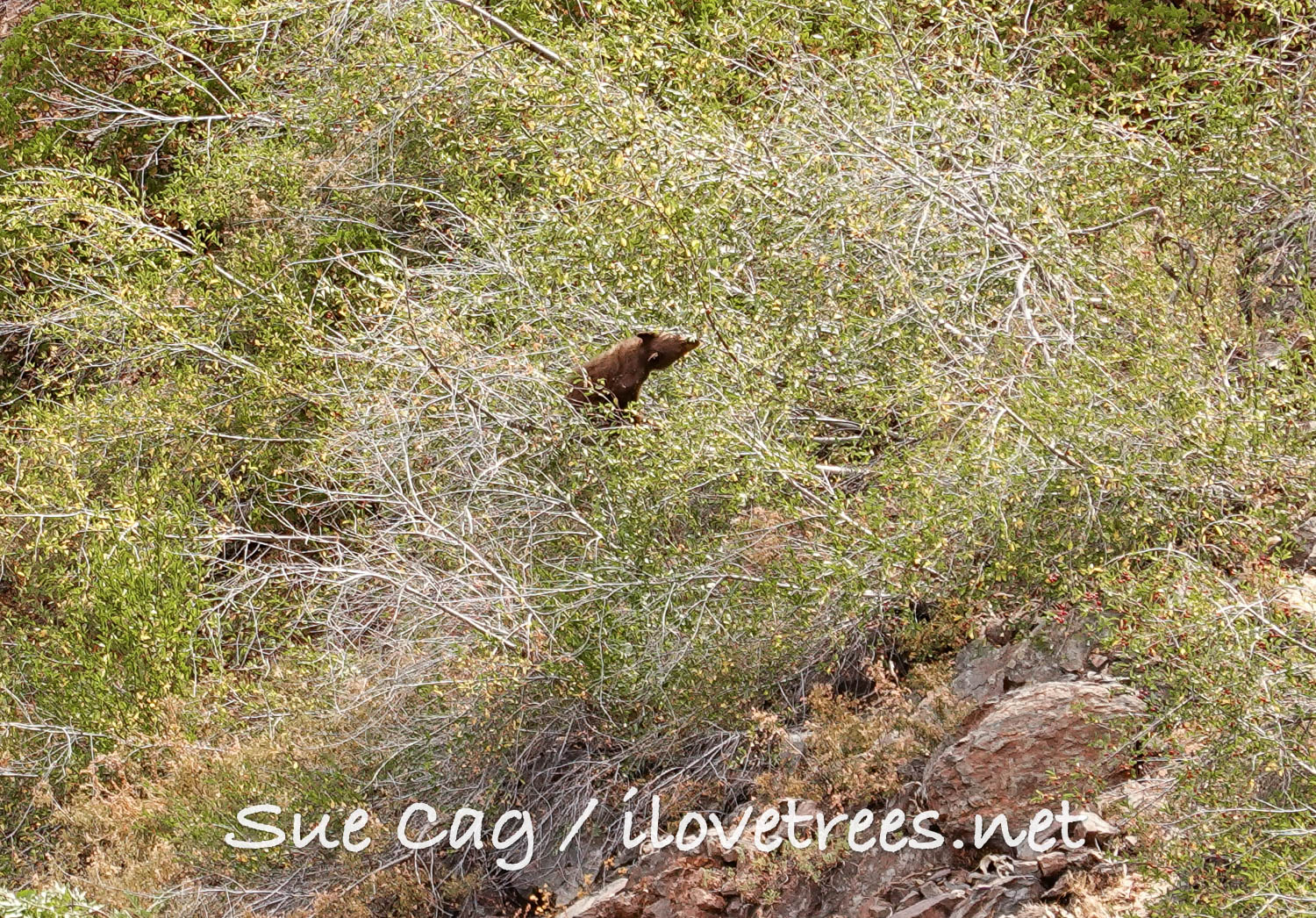 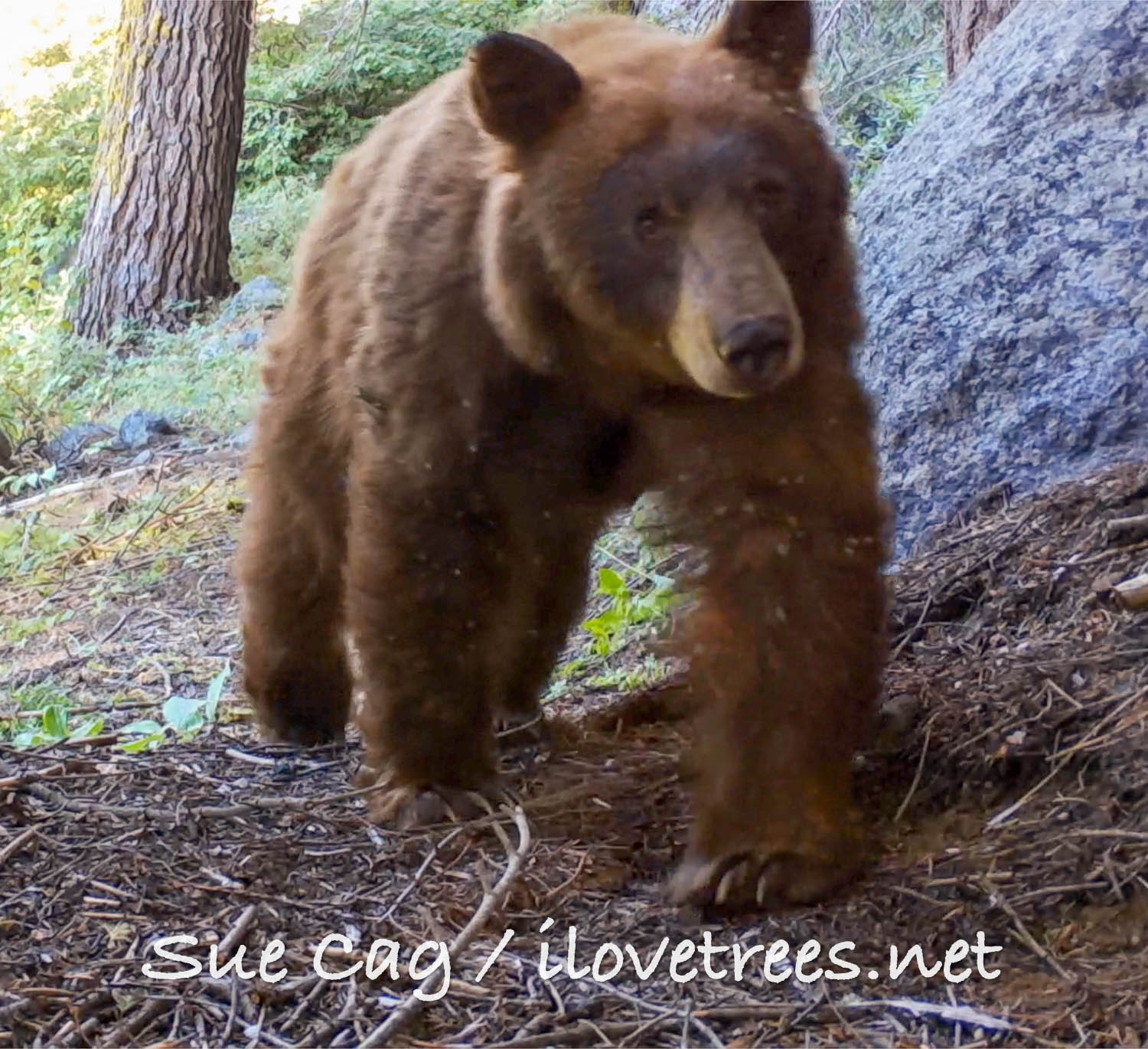