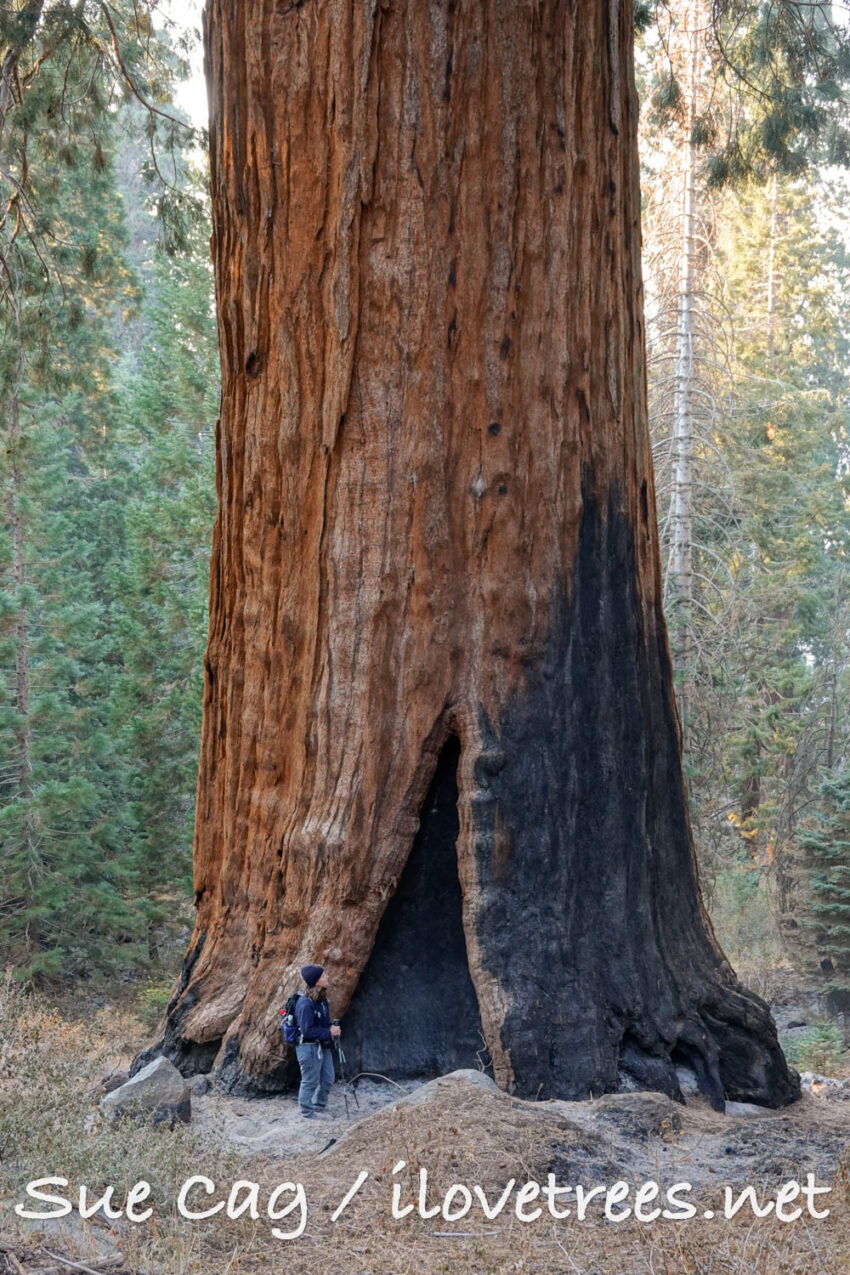 I only had an hour or two for a brief walk after moving (what I saved of) my belongings into our new rental in Sequoia Crest. My goal was to find out if the “Grand Snag” survived the SQF Complex / Castle Fire. Unfortunately, it burned up. This was one of the most amazing snags I’ve ever seen, similar to the Monarch Snag in Big Stump Grove, albeit not quite that big. Before the fire, it still had colorful bark hanging on, even though the tree perished ages ago. There was also a cavern inside, but no access to it from any crevice around the perimeter (it’s wide open now). I watched ravens nest at the top. When I flew my drone up high to get an expansive view of the sequoias, the light wood of this former tall snag always stood out from everything else, like an obvious beacon at the top of the grove. I often used it as a landmark to figure out my position.

I came up to “Hidden Mammoth” first on my way up the hill (it’s just below Grand Snag) only to find it snapped in half. My heart sank when I caught sight of it. I pressed my hands against the sides of my head, as though somehow I could convince my mind what I was seeing wasn’t real. This tree was huge and beautiful. It was very wide at the bottom, with a massive fire scar on the upslope side. It was a glorious giant hidden in plain sight, if you knew where to look.

I also checked on a tree I call “Widower” because it stands next to a snag and sequoia remnants. To my delight, I found it to be ok*, even though the fire came close. The forest is green and nearly all sequoias in view are unharmed. This is completely different from the western side of the grove where every sequoia was destroyed. It also makes Hidden Mammoth look like it was singled out, like a bomb was aimed and landed right below it. Fire entered the trunk at the bottom and burned through all the way to the top. There were only shrubs at the base before the fire, a mix of gooseberry, hazelnut, and whitethorn. Now the broken snapped-off giant stands out starkly in an otherwise green forest.

Next, I traipsed over toward the “Birthday Tree” (so named for no better reason than a fond memory from my partner Kim’s birthday). All these tree names are merely a way to refer to individuals, just as we distinguish one person from another. Along the way, I walked through a large burned up moonscape of ash. The area used to be an expanse of manzanita, a shrub that loves fire, burns hot, and has now killed the sequoia unlucky enough to be standing near it. I recognize the overgrowth of this and similar prolific shrubs as the scourge of logged groves.

I finally exited the ash area and walked through spotty burns mixed with nice greenery up to Birthday Tree. The ground burned around the giant, but fire didn’t enter the tree at all as far as I can tell. The fire scars on both the upslope and downslope sides look exactly the same. A chipmunk scampered up the trunk when I arrived, just as I’ve seen him do many times before. Only a harmless blackening mars the bark on one side.

I continued up to see “Column,” so named because it stands out in the open, straight and strong, like a column. Its entire top blew off and is scattered about on the ground. All the chinquapin that crowded around the trunk is completely gone. I flew my drone around this tree recently. It was the only sequoia that had enough open space around it to use the automatic circling program, a setting where the drone will fix on an object, then automatically circle around and around. It’s easy to lose your drone in a forest when trying to do a maneuver like that.

Next, I went by a snapped-off, but still very much alive sequoia below Column. I couldn’t figure out how the fire entered this tree. It seems like much of the fire entered the sequoias from the bottom, due to overgrown shrubs or forest debris. However, it’s far too soon to make such a summation, and likely not uniform throughout the grove. The base of this individual seems intact and no trees were close enough to light the canopy, so how fire entered the tree remains a mystery.

Finally, I went by the wreckage of Steadfast (again). An adjacent giant lost its top, but only the very top, and it’s only blackened at the base. Lucky tree. I continued down past the Alder Creek Giant, once again praising its miraculous survival. I walked through the heavy ash below, down “middle ski hill,” and out via Dogwood. On my way out, I caught a sunset glimpse of sequoia domes forming a startling contrast in front of a thoroughly burned up forest in the background.

* Widower was later found to be on fire and lost a portion of its top, but is still ok.