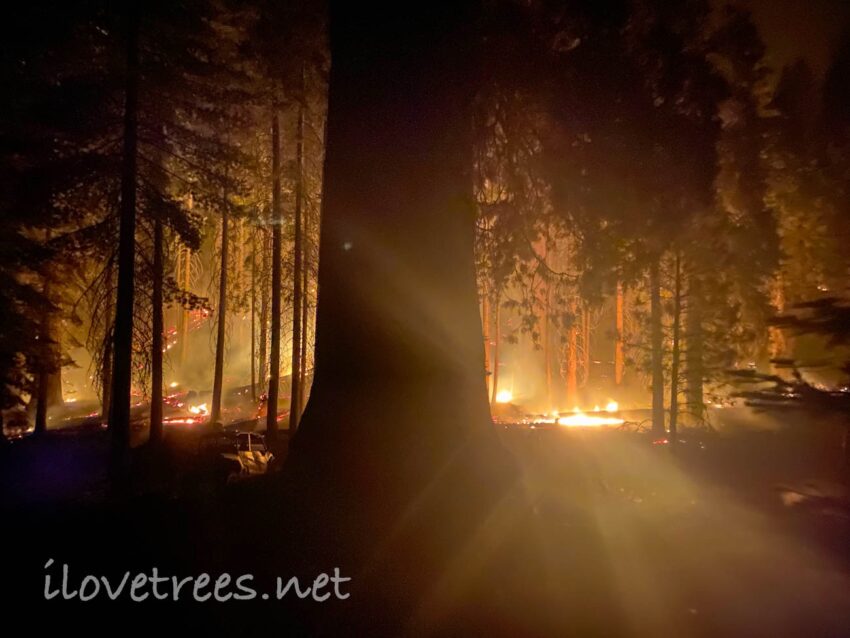 Thousands of giant sequoias perished in the 2021 Windy and KNP Complex fires. Combined with the Castle Fire last year, the immensity of this loss is impossible to fathom. The sequoias are harbingers of our planet’s destruction. It’s just too hot and too dry, yet we refuse to address climate change.

Redwood Mountain had by far the largest amount of acreage impacted. Several hundred acres burned severely and nearly the same amount burned with moderate severity. Redwood Mountain burned severely despite the many prescribed burns conducted in the grove over the years. Also impacted was Suwanee Grove, where most of the grove burned intensely (Suwanee was also subjected to prescribed burning). Atwell was significantly impacted on the west side (in areas of past logging). Castle Creek Grove (an untouched wilderness grove) burned thoroughly under a pyrocumulus cloud, yet somehow lost only one big sequoia and a few smaller ones. Oriole Grove and New Oriole Grove are also ok despite having dense understory and many snags, likely due to lack of human management. See a complete list of grove conditions below. 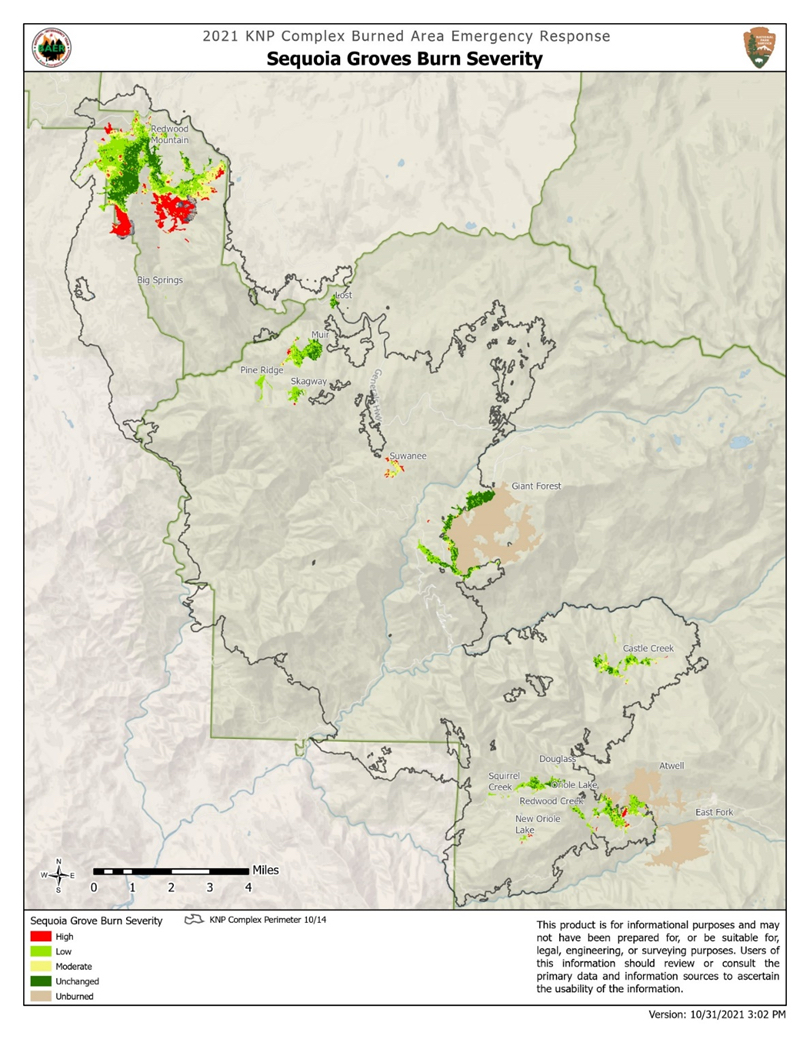 The Forest Service released the following Windy Fire burn severity chart based on satellite imagery. If this information is accurate and 25% of sequoia grove area burned severely, we are looking at a mirroring of last year’s Castle Fire (which severely burned 29% of sequoia grove area). Sequoia death in severely burned areas will be nearly 100%. Sequoia loss in moderately burned areas will be around 34% (using data from the NPS Castle Fire study).

Below is the Windy Fire severity map included in the NPS study. It indicates severe burns in nearly all groves impacted. All of these grove areas have been logged to one degree or another. Starvation Creek fared the worst, being nearly wiped out. Deer Creek Grove also lost all but one or two of its sequoias. Packsaddle likely lost a third; Long Meadow lost a third; and Redhill lost more than a third. Peyrone and South Peyrone also suffered significant losses. Cunningham didn’t suffer any losses. See below for a more complete summary of the fire’s impacts. 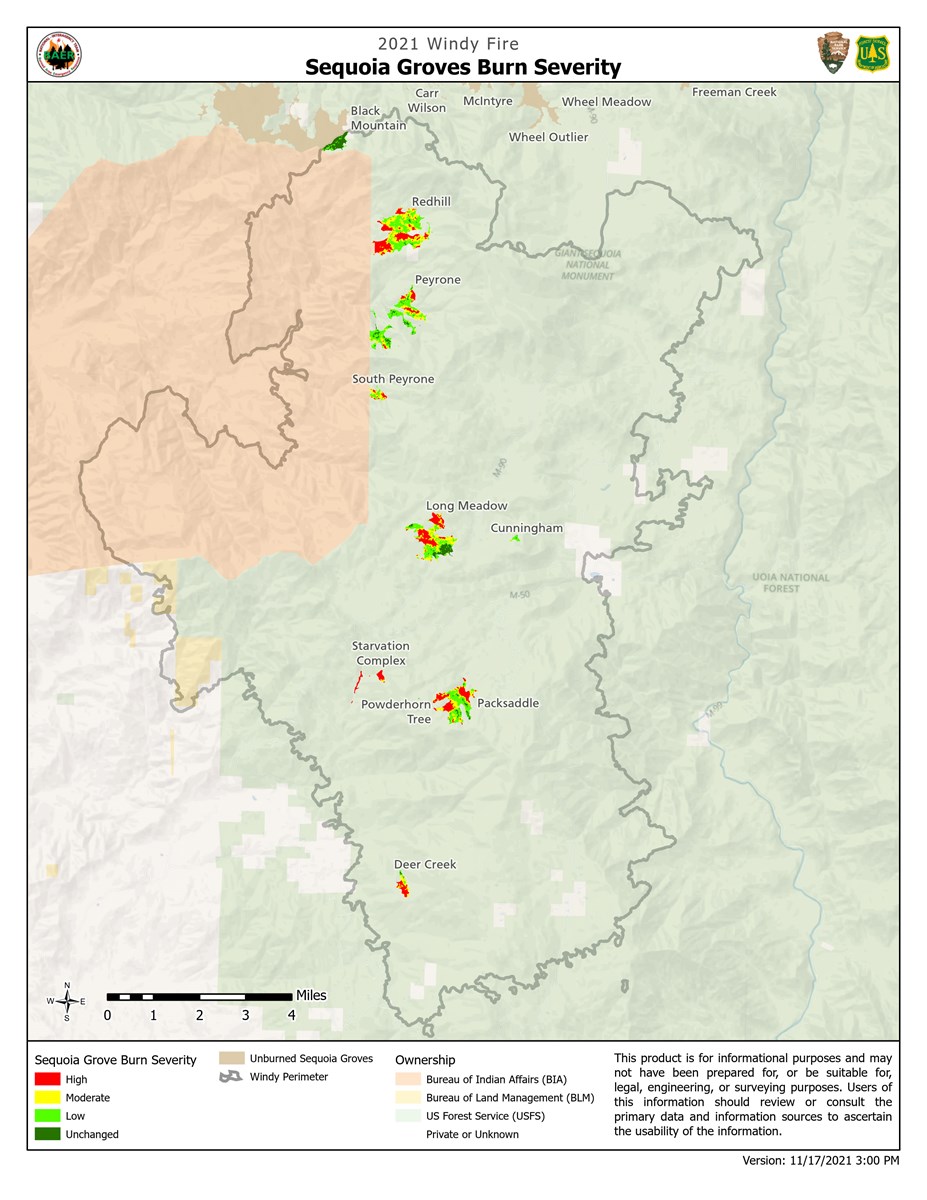 Groves impacted by the Windy and KNP Complex fires, in alphabetical order:

Atwell-East Fork Grove
The KNP Fire burned the western portion of the Atwell section, from the Redwood Creek area toward the Arm Tree area. Most of the burn was limited to a surface burn, but some areas burned intensely and there are sequoia losses. The NPS report states that: “Where Atwell burned severely, the forest was mostly second growth” (due to pre-park logging). A friend reports that the Arm Tree didn’t burn and none of the named trees in the western section were damaged except for Diamond – the giant survives, but it was badly burned through its namesake, digging a cavern deep into the middle of the vertical trunk. One of Touchdown Jesus’ goalposts was turned brown as well.

Castle Creek Grove
Castle Creek Grove burned intensely and thoroughly under a pyrocumulus cloud, yet somehow only one big sequoia died (along with several smaller ones). Conifers and shrubs surrounding the grove (and within the grove to a lessen extent) burned severely. Most of the wonderful sugar pines inside the grove boundary also survived. There are thousands of glorious sequoia seedlings in Castle Creek as of October 2022 – hopefully (unlike in so many other areas) they will be left alone to flourish.

Giant Forest
Sequoia losses are limited to the southwest portion of Giant Forest. I counted six dead sequoias and four badly damaged sequoias during a brief drive through (I did not look closely). The fire was limited to the edges of the grove. It was not permitted to rage through the grove as it was in others. The tourist area appears unchanged. The named sequoias were protected. The famous General Sherman tree was not impacted. The KNP Fire was fought along the highway that cuts through the Giant Forest. It is interesting to note the necessity of such an enormous amount of effort to fight the fire from torching the Giant Forest, despite this area being so heavily prescribed burned. In June 2022 the Giant Forest was burned purposely yet again. In five or six years we will see several standing dead sequoias from this harmful activity (which burns the sequoias’ already compromised protective bark and girdles the tree).

Muir Grove
The NPS stated early on that efforts prevented the KNP Fire from burning the upper portion of Muir, the area near the trail. According to the NPS report, the rest of the grove experienced mostly low impact fire, but had areas of intense burn in other sections. There may be losses in these areas far from the trail. I have not yet been able to personally verify the condition of the grove.

New Oriole Grove
I haven’t visited New Oriole yet personally, but I’ve seen photos of the domes (from two trusted sources) and they all appear intact. I don’t know what it looks like on the ground and if the bases of the sequoias burned badly or not. This good news runs contrary to the NPS report showing that nearly a quarter of the grove burned severely and another quarter burned with moderate severity.

Oriole Grove
According to the NPS report, Oriole Grove experienced a mostly low-intensity burn in the KNP Complex Fire. I’ve haven’t visited yet, but I’ve seen an aerial image that shows the domes to be intact. The grove did ok despite being untreated and extremely fuel-dense – a lack of human interference allows fire-adapted forests to manage themselves appropriately.

Parker Peak Grove
There is no info about how Parker Peak fared in the Windy Fire since it’s located on the Tule River Indian Reservation.

Peyrone Grove
The Windy Fire started on the Tule River Indian Reservation west of Peyrone Grove. It was small and slow moving when it started. It gradually creeped east toward Peyrone, then tore off to the south and east. The Forest Service announced that most of Peyrone did not burn severely, but I have not seen it yet due to the closure of Crawford Road.

Pine Ridge Grove
According to the NPS report, Pine Ridge experienced low impact burn during the KNP Complex Fire. I know this area to be thick with debris and brambles as well as adjacent to a drier landscape. With so much fuel, it’s telling that this grove did not burn intensely.

Red Hill Grove
The Forest Service chart shows that about a third of Red Hill Grove burned severely in the Windy Fire, and another third burned with moderate severity. We can expect to see major losses in Red Hill.

During a drive through the park with stops at various viewpoints, I’ve personally seen hundreds of skeleton sequoias and brown domes in Redwood Mountain. It’s also still burning as of May 2022, causing an occasional spike on my satellite fire detection map. The vast majority of losses are farther in the canyon and somewhat hard to see through the polluted haze from the road. There are also hundreds of beautifully intact green domes easily viewable from the popular Redwood Mountain pull-off.

Skagway Grove
According to the NPS report, Skagway Grove experienced mostly low intensity burn in the KNP Fire. The grove burned in its entirety. I have not had a chance to see it for myself yet.

South Peyrone Grove
The Forest Service chart shows that 21% of South Peyrone burned severely and 54% burned with moderate severity in the Windy Fire. We can expect to see losses. The fire burned down the Mule Peak lookout tower located above the grove. Crews had wrapped the tower, but it burned down anyway (really wish they wrapped my house rather than old buildings like this). I haven’t been able to see the grove for myself yet due to the FS forest closure.

Suwanee Grove
According to the NPS report, nearly all of Suwanee Grove burned intensely (moderate to severe) in the KNP Complex Fire. The report states that: “Reconnaissance via helicopter over Suwanee indicated that many of the areas classified as moderate severity were under-predicted in the severity map, potentially resulting in more mortality than estimated.”

During a brief drive through the park, I stopped to look down at Suwanee. It broke my heart to see so many brown sequoia tops and skeletons. It’s also very strange to be able to see the grove from the highway. The entire area is badly burned from above the road to far downslope. Most of the trees (not just sequoias) are dead. Looking through my binoculars though, I could also see some green domes in Suwanee. I don’t want to get too excited about this since without seeing if their bases are damaged, I can’t say for sure if they will survive longterm. Hopefully I will get into the grove soon to verify.