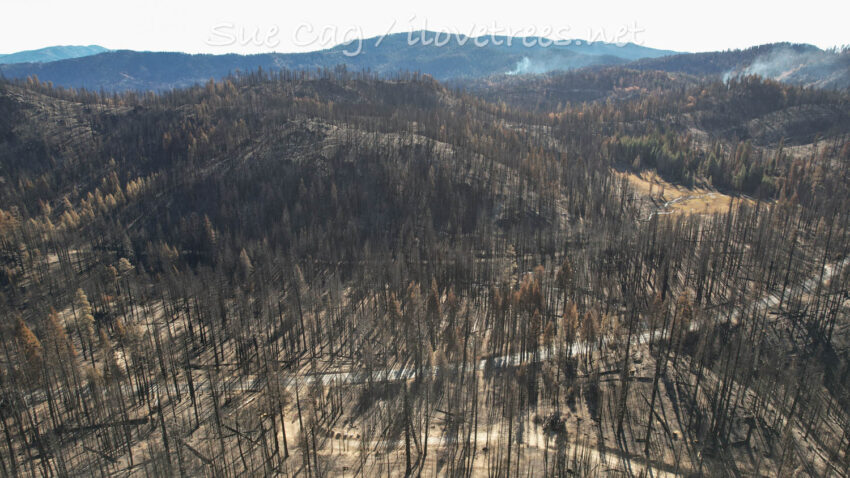 Featured Image: The view looking from Long Meadow Grove toward Packsaddle Grove after the 2021 Windy Fire. This area was logged 20 years ago and it burned just 5 years ago in the Meadow Fire.

It’s December and the sequoia groves haven’t seen any winter snow. Because of the lack of snow, the county opened up the Western Divide Highway. Unfortunately, you can only drive through and not get out of your car since the entire forest is closed, per USFS orders. How can land owned and paid for by the public be closed off to us? They say it’s for “public safety and to protect natural resources.” What about the cows that are in there right now, stomping around in the ash, crushing any chance of natural forest regeneration? I encourage everyone reading this to contact Sequoia National Forest supervisor Teresa Benson at 559-784-1500 to demand access to your public land. It’s yours. It should never be closed off. Areas impacted by the 2015 Rough Fire are still closed, six years later!

Because our lands are off limits, I could only see so much of the groves. I took a quick look (from a distance) into four groves impacted by the 2021 Windy Fire: Starvation Creek Grove, Deer Creek Grove, Packsaddle Grove, and Long Meadow Grove. There are both areas of mixed impacts and areas that burned severely. The smaller groves of Deer Creek and Starvation Creek were devastated, while Packsaddle and Long Meadow experienced mixed impacts, although they lost more sequoias in number across their larger acreage.

Starvation Creek Grove
The entire grove and most of the surrounding forest burned severely. There are currently only three surviving sequoias in the upper section of the grove. One of them looks ok. The other two have sparse foliage. All three are next to each other and appear to be a single tree from afar. What was thought to be the Condor Tree is now an unrecognizable snag. Much of the surrounding forest looks like a moonscape. There are no surviving sequoias at all anywhere along the long stretch that makes up the lower portion of the grove along the creek. The temperature here was 80 degrees, in December!

Deer Creek Grove
The entire grove burned severely. There is a single large sequoia survivor at the bottom of the grove. Two smaller sequoias and a few very young ones are topped with sparse green foliage in the same tiny pocket. This is surrounded by a swath of burned forest. All of the sequoias in the upper section of the grove are skeletons, including one of my favorite places of all time in the sequoias. I spent some wonderful quality time there last summer before the fire. It hurts to see it this way now.

Packsaddle Grove
Packsaddle burned in a patchy manner, with some sections completely intact and some areas burned to a crisp. There are scores of giant sequoia survivors. There are also many dead skeletons. Unfortunately, the Packsaddle Giant is one of those skeletons. See the photos below. The Ghost Tree was also hit – the trunk broke in half and appears hollow when seen from the top. Its lifeless side leader still hangs on and bits of green foliage cling to skinny low branches. It looks like a bomb went off in the immediate area below these trees, while leaving so many surrounding sequoias intact. Hundreds of vibrant green domes still stand tall and majestic on the slopes of Packsaddle Grove. In contrast, the view just outside the grove looking north is an enormous expanse of burned forest, one of the worst swaths of brown and gray I’ve ever seen. The sequoia forest fared much better than the tree plantations and cut-over landscape of the surrounding area.

Long Meadow Grove
The grove burned in a patchy manner, with some sections completely intact and some areas burned to a crisp. There are scores of sequoia survivors along with many dead skeletons. Many of the surviving green domes are clustered together. Several sections like this remain. In contrast, some survivors stand next to areas of harsh burn peppered by sequoia skeletons. One area of sequoias burned severely, killing around a hundred giants in a single drainage. Fortunately, Red Chief survived, as did some of the many other remarkable giants in the upper sections of the grove. The base of Red Chief is damaged and blackened, but the canopy is unchanged. One of my favorite sequoias of all time (a wildly-branched giant reminiscent of the Bonsai Tree) still stands, though it was damaged and lost its top. Regarding the lower portion of the grove, the published burn perimeter map shows that the Trail of 100 Giants attraction is not included inside the fire boundary. Two sequoia trunks that were on the ground there are blackened, but the area closest to the road appears unchanged. The surrounding landscape burned severely, especially south and east down the Western Divide Highway toward Johnsondale.