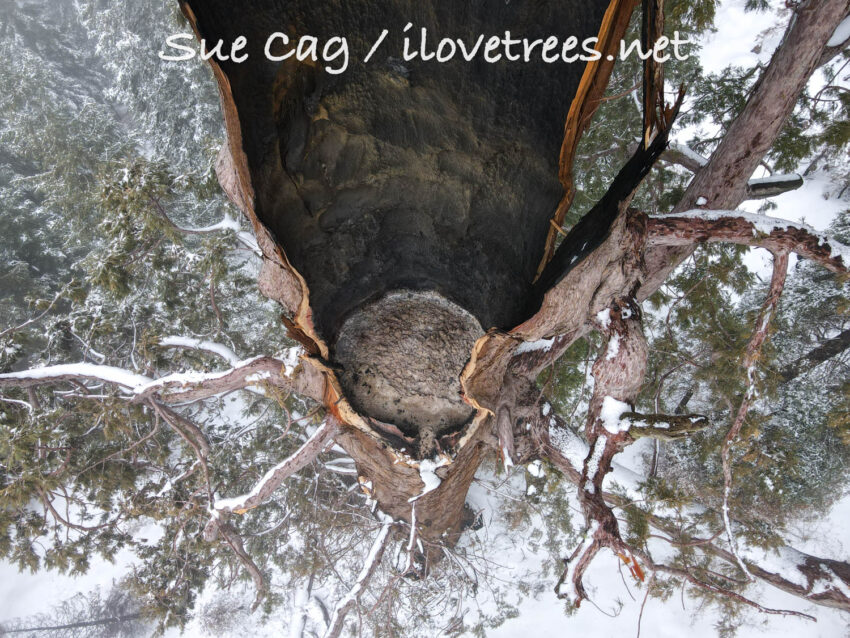 UPDATE 6-18-21: This tree broke in half and perished. See https://www.ilovetrees.net/whitethorn-sequoia-dies-in-castle-fire/.
UPDATE 3-22-21: This tree dropped a gigantic branch, leaving an enormous gaping hole with a ton of wood to support above. Featured image updated. New pictures below post.

While walking through Alder Creek Grove, I often smell fire. Since it snowed, I thought it must be the moisture bringing out the scent of burned wood. I could smell it more strongly when I passed by charred snags so I thought my conclusion was correct. It’s truly fascinating how well we can gaslight ourselves. Even when ash fell onto my glove, I didn’t believe any of the giants were still on fire. How could they be after a few snowstorms?

I keep checking on many of the giant sequoias in Alder Creek. Everyone seems to think that the SQF Complex / Castle Fire is over and that the surviving trees will stay that way, and that we know for sure which ones are dead and which are not. All of these assumptions are inaccurate. Giant sequoias can burn for many months, long after fire comes through. Their limbs and treetops may fall off years later. Anyone who surveys a sequoia grove right after fire and then returns a few years later will notice this phenomenon.

I’ve checked on a giant sequoia I refer to as Whitethorn many times. I went up there two days ago and the big tree seemed unchanged. There’s a huge burn hole high up on the trunk and limbs discarded on the ground, but things appeared the same as my previous visit. The tree reminds me of Wendell Flint’s Bent Tree, a remarkable sequoia with an impossibly bent top that stood in McIntyre Grove until the Castle Fire killed it. Whitethorn supports a ton of weight above the carved out hole and it stands to reason that the top will eventually fall. With this in mind I returned right away to take video, to document the tree in case it did fall. When I looked up at the giant this time, I was surprised to see smoke coming from the burnt hole. The giant is still on fire! How many months has it been? The Castle Fire came through on September 13th, 2020. It’s now February 25, 2021. Even after snow, the fire continues.


Whitethorn stands at the southern end of Alder Creek Grove, by an area hit hard by the fire. The giants just upslope acted as a wind-break, stopping most of the fire from pushing farther into the grove on that end. They are all dead skeletons now. It’s almost as if they sacrificed themselves for the greater grove located behind them. It seems impossible, but the sequoias past their line are mostly green. Instead of pushing into the grove on that side, fire swept through the small trees south of their position.

Whitethorn carries immense outstretched branches up high, the kind that seem impossibly thick. It’s a sequoia that attracted my attention from the first time I walked through this section of the grove. My heart breaks for the loss of its grandeur, and possibly its life. People frequently mention “moving on” or “moving forward” to me, as consolation after losing my home and my forest. I finally received my insurance checks five painful months after the fire, and after a very stressful process. Maybe now I can move on? This notion suggests moving forward from something that has ended, with a distinct before and after, perhaps like the loss of a loved one. But nothing here has ended. The fire is still burning. The sequoias continue to die.

As I was returning from my walk, I noticed that a big sequoia I call Candelabra lost the remainder of its top. It was there the last time I passed by and now its on the ground. Obviously, this tree was also still burning long “after” the fire tore through the area. It may be the end of the giant. I walked down around the wreckage strewn all over the hillside. Candelabra was one of the roadside sequoias I appreciated during my very first walks through Alder Creek Grove.

Today I received a wind advisory warning. My first concern when I see these alerts is for the sequoias, fearing that they will lose more of their treetops and that the wind will fan more flames. During my walk yesterday I heard the very loud crash of a tree falling coming from somewhere below me downslope. I scrambled around trying to find the loss, but it was impossible to pinpoint the location. I noticed that one of the sequoias I recently filmed had a fresh break at the top. The exposed sapwood stood out like a neon light against the harsh black of the burnt trunk. This has happened so many times lately. I’m not sure it’s ever going to stop.

Notes: Whitethorn is so named because it used to have an overgrown thicket of whitethorn pressed against its base, a tangle so dense that it was nearly impossible to reach the trunk. These shrubs burned into the tree. While standing below the burning giant, I heard knocking sounds. The wood is contracting and in the process of separating. I’ve heard these sounds several times while standing below damaged trees like this one.

Alder Creek Grove (and Sequoia Crest) “After” the Castle Fire