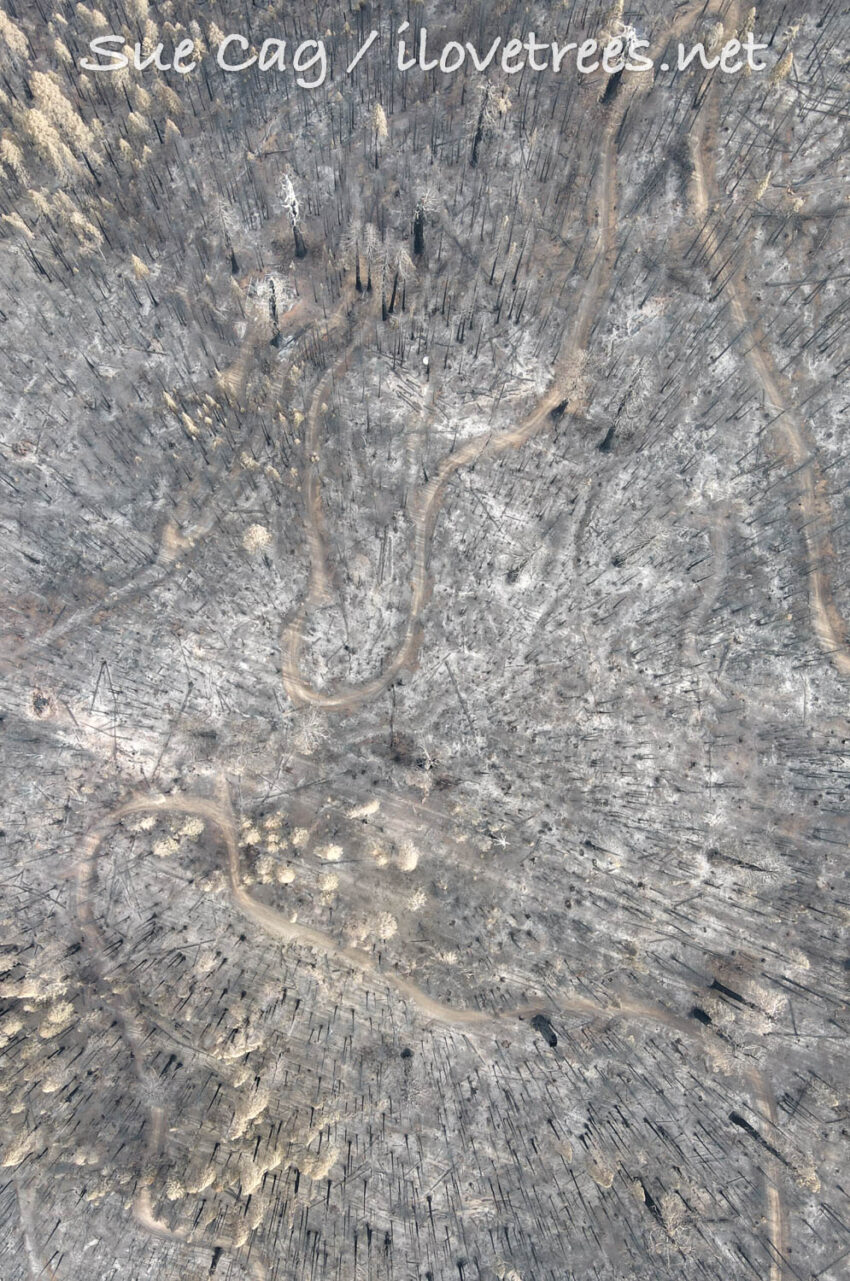 It has been exactly one year since the 2020 SQF Complex / Castle Fire tore through the giant sequoia groves of the Sierra Nevada. This day is permanently etched in my mind as the day my Home burned to the ground. That’s capital “H” Home, representing both my house and the forest I so loved.

Below is a recap of what happened in each grove. The Castle Fire actually continues to burn to this day. When wind kicks up or there’s a storm, the big trees reveal that they are still on fire deep inside. There are “flare ups” of the fire on a regular basis. I watch people rebuilding (or purchasing) houses right next to trees actively on fire and it’s like looking at insanity. Despite all that has happened and what we know will happen, people continue to be blasé about fire.

On a more personal note, I remain a sort of climate refugee. One year later I still have no permanent residence. I am renting a house on the mountain to stay close to my trees, but I don’t know how long I will be permitted to do so. I’ve also been spending time away, to escape the relentless smoke and noise that permeates the area.

As of this writing, there are several new fires on course to destroy more sequoias. The Windy Fire is currently burning Peyrone Grove and is very close to (if not already in) South Peyrone Grove and Red Hill Grove. Part of the KNP Complex, the Colony Fire may be headed toward Suwanee Grove, and is located west of Giant Forest. Also part of the KNP Complex, the Paradise Fire (a very poorly chosen name) is currently heading into Oriole Grove. We are clearly living in an endless nightmare.

GROVES IMPACTED BY THE 2020 CASTLE FIRE (in alphabetical order) followed by associated articles:

Burro Creek Grove
The Castle Fire just barely dropped into upper Burro Creek in a few places. It did not burn through the grove. I’ve visited the grove since the fire, but I didn’t reach the upper areas impacted. I didn’t find any sequoia losses using aerial views.

Dennison Grove
I have not been able to personally visit Dennison Grove to offer a verified report. The area did burn, but not severely according to the fire severity map. An updated ESRI satellite map shows green domes by all of the waypoints I have for sequoias I visited in the past. This indicates that none of them have been permanently damaged.

Devils Canyon Grove
I have not been able to personally visit Devils Canyon Grove to offer a verified report. The area did burn, but not severely according to the fire severity map. An updated ESRI satellite map shows green domes by all of the waypoints I have for sequoias I visited in the past. This indicates that none of them have been permanently damaged.

Forgotten Grove
Forgotten is a little-known grove of two trees. It’s considered a separate grove due to the significant distance from any other sequoias. The upper sequoia was severely damaged and may not survive (it will need to be checked again after several years pass). The lower sequoia was also damaged but will likely survive.
Forgotten Grove: A Tale of Two Sequoias

Garfield-Dillonwood Grove
The Garfield section of Garfield-Dillonwood fared better than any other area in the Castle Fire. The fire went through the entire grove but did not kill that many sequoias. The famous King Arthur tree continues to burn to this day. Several others are damaged or were killed, but the numbers are low. There is one small area that suffered severe burn and the number of losses there is unknown.

Portions of the Dillonwood area were severely impacted with innumerable losses. The upper part of Dillon Canyon was devastated. In striking contrast, green Garfield sequoia domes stand right above the annihilated area, just on the other side of the ridge. The young sequoias along the road into Dillonwood experienced mixed impacts and generally fared well. The same is true for a few other pockets of sequoias including those on slopes below Moses Mountain. Because most of the loss is out of sight of the casual visitor, most people will not comprehend the impact of the Castle Fire in Dillonwood.
Dillonwood after the Castle Fire
King Arthur, the 9th Largest Tree in the World Perishes

South Fork Grove
I took a look at South Fork Grove using binoculars from vantage points on the steep ridge opposite the grove. I noticed many dead sequoias. Large domes of fully brown foliage are mixed in with green sequoias. Many young sequoias were killed as well. I spotted one (minor) barren area of ash with a sequoia skeleton. These losses don’t appear to be reflected in the severity map released by the NPS which displays the area in green. That said, the grove is largely intact and didn’t experience fire anywhere near as intensely as other groves.

Sequoia National Park
I have visited Sequoia Na...
Alder Creek Grove after the SQF Complex / Castle Fire - October 27, 2020
I only had an hour or two...
Dillonwood after the Castle Fire
Thousands of Dillonwood s...
Windy Fire and KNP Complex Burning 22 Sequoia Groves and Counting
The Windy Fire ​and KNP C...
Whitethorn - Another Giant Sequoia Burning in the Castle Fire
Whitethorn was an extraor...
RIP: The Great Bonsai Tree - One of the Most Remarkable Trees in the World
We lost the Great Bonsai ...