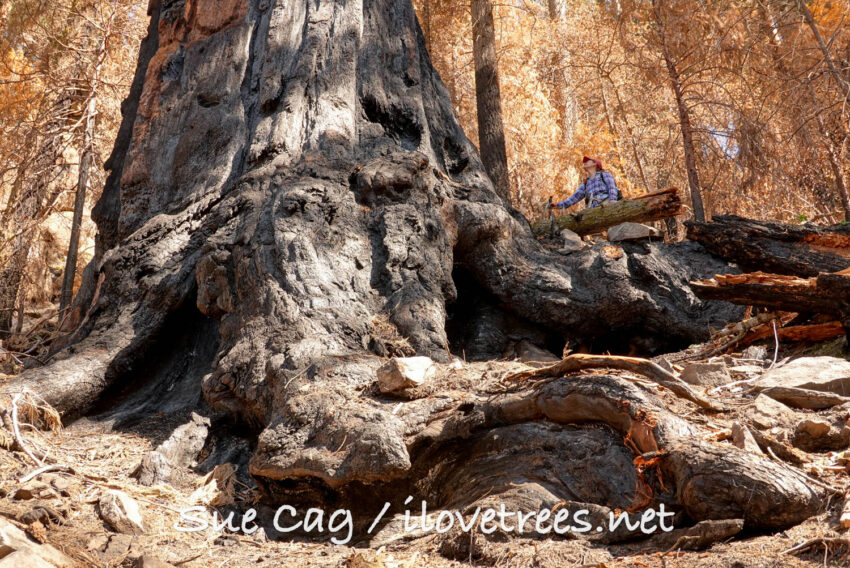 There’s no easy way to get up to the Forgotten sequoias. An old historic trail used to wind around Dennison Ridge near the big trees, but it’s now either covered over by oaks, laurel, and shrubs, or just plain non-existent. I get pretty scraped up pushing through brambles, crawling under branches, climbing over logs, and maneuvering across drainages. I also eat ash going up a couple of badly-burned slopes. I catch a glimpse of the old trail a few times farther up, but only fleetingly. It’s such a shame. In its heyday, the well-built route, like most of its era, moved gracefully upslope, across lush streams (now dry), beside rock escarpments sheltering beautiful arrays of wildflowers, and past spectacular views of the entire South Fork canyon.

I traced the old trail contour on my GPS before leaving home and made a strong attempt to follow it. Even when these trails fall into disuse, the general contour is usually still the best route to follow. I am hot and exhausted when I finally reach the top of the ridge and find myself in a severely burned area. I walk past blackened sugar pine snags and deep holes in the ground where unknown trees used to stand. I’m not far along before I see a charred trunk that rises taller and looks bigger than any other around it. It’s the upper Forgotten sequoia, and it appears to be dead.

The medium-sized sequoia burned badly in the 2020 SQF Complex / Castle Fire. Its trunk is blackened from top to bottom. As I approach, I see empty skeleton limbs high up on the right side of the trunk and fully brown needles on the left. I follow bear tracks to the base of the tree. There are always bear tracks leading to the sequoias, in every grove, even after severe fire. This bear also scratched the charred tree, leaving exposed orange fuzz in the distinct shape of claws running down the bark.

The ground below the sequoia is barren ash. The area is severely burned, but the scorch doesn’t extend too far into the woods. Many green companion conifers including incense-cedar, sugar pine, white fir, and torreya (California nutmeg) survive outside what seems aptly described as a “blast zone” around the big tree. The east side of the sequoia crown also retains some green foliage, but it’s unclear whether or not it’s enough to sustain the tree, or how deeply the heat pierced the bole.

There are only two sequoias in Forgotten Grove and it’s a complete mystery how they came to be. They stand a significant distance away from the rest of their brethren. How long have they been here? Were there once many more and now just these two remain? I can find no old sequoia remnants or snags. Perhaps they burned up entirely over the years and left no trace? Or maybe it has always been just these two giants. If so, how did they get here? I imagine the bear bringing over seeds embedded in his fur from Devils Canyon Grove, the closest grove to this location, but no one really knows.

The grove was discovered (or rediscovered) by Nate Stephenson and Dwight Willard while on a scouting flight in the 1990s. These two prominent tree experts were looking for sequoias west of Devils Canyon Grove. When they didn’t find any to the west, Stephenson suggested they look north, and low and behold, they found these two big trees. Stephenson borrowed Willard’s name “Forgotten” since it seemed appropriate. Surely, NPS crews knew of these trees in the past since there was an old trail nearby, but over time and without documentation, the giants were likely forgotten.

I hike down the drainage from the “upper Forgotten sequoia” to the “lower Forgotten sequoia.” The ground is ash at first, then strewn with rocks. I stop on the steep slope to get a view of the top of the lower sequoia. Part of the tree burned through where the upper trunk appears to have divided into two. A branch remains below the damage and another, perhaps a leader, extends upward above the gash.

The entire base of the giant is completely blackened and carved into. The fire burned away a large amount of wood, extending far up the trunk. Heaps of rocks and limbs are strewn about the ground below. The bottom of the tree is remarkably wide with considerable flare. The sequoia is much bigger than I expected and significantly larger (and seemingly older) than the upper sequoia.

I stumble over rock piles and logs to get to the downslope side of the big tree. I climb over the big tree’s gigantic outstretched roots. They reach out so far I can’t figure out where they end. I find a miniature waterfall beneath one huge bulky root leg. I kneel down to look through a space burned out below the trunk. I can see light on the other side. There is significant moisture underneath the tree. Vivid orange, green, and dark purple fungi take advantage of the damp area.

I back up to look at the entire base. It’s a massive sprawl across the slope. The trunk then tapers greatly and the bark changes from charred black to sequoia orange. The canopy from downslope looks amazingly vibrant, green and healthy. A few pieces of very old gray wood stick out from the top, indicating that this tree has been here quite a long time, and has experienced fire before. If I only looked at the tree from downslope, I wouldn’t have noticed the heavy damage on the upslope side. I squint my eyes in the sun. There’s a black hole up high, across from where part of the trunk burned away. This suggests that the fire burned a cavern into the tree up there.

I decide to return to camp via the drainage below the lower sequoia instead of following the old trail contour back. It looks easier. I’m delighted to find that the stream by the big tree keeps going and holds a significant amount of water, especially after such a dry winter. I make a few wrong turns on my way back, followed by a few right ones that help me avoid many of the brambles I struggled with earlier. My route leads me out of the forest via the Garfield Trail which, unlike the old historic trail, is thankfully clear and easy to follow. I hike back up it again a couple days later to investigate fire damage among the Garfield sequoias, and King Arthur in particular.