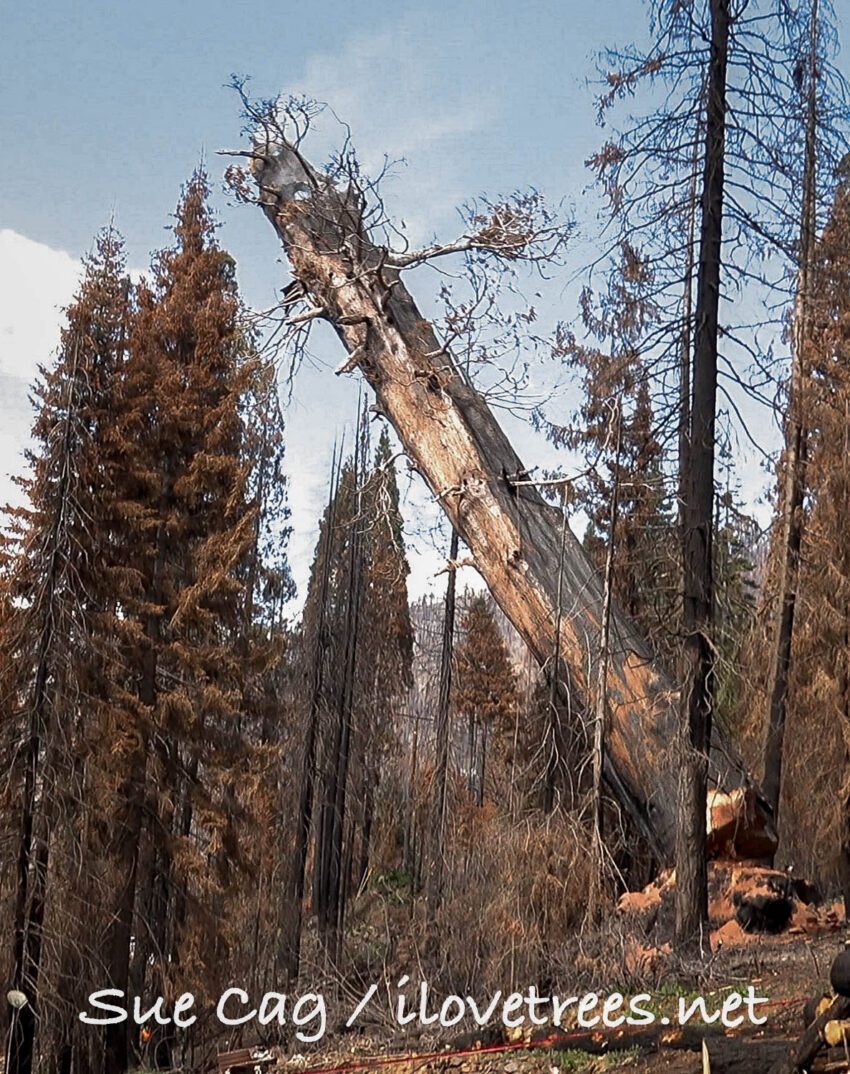 A massive giant, approximately 14 feet in diameter, was cut down in the Alder Creek Grove on June 3rd, 2021. Tulare County decided to cut the sequoia down after it was reported to be on fire. [Read more: 2020 SQF Complex / Castle Fire].

On June 1st, the fire department was called to check on a ground fire at the base of a giant sequoia located along Redwood Drive in the half-burned up community of Sequoia Crest. The ground was indeed burning and smoke could be seen billowing from the sequoia’s top. This isn’t unusual as many of the giants continue to burn, despite the fact that it has been over eight months since the fire tore through.

That same day, Tulare County Fire decided to cut the sequoia down. They immediately hired a crew and had them start the very next day. It’s remarkable how immediately we have the will and means to destroy, while we never seem to have the will and means to save. Many of the sequoias could have been saved soon after the blaze, particularly those that were still intact in accessible “green” areas of light to moderate burns. The sequoias died slowly and months passed by while we could have done something. Now, the lingering fire is deep within the bole and likely a lost cause. The only consolation for the cutting of this giant is that it had already burned beyond survival.

The loggers looked like Lilliputians crawling all over the foot of a god, repeatedly stabbing it until the giant finally fell. For ten hours over the course of two days, I stood in the hot sun bearing witness to this. Below is a video of the ordeal compressed into three and a half minutes. After the giant finally fell, onlookers cheered. I waited until they all left, then went down to pay my respects in silence.

Sequoia Skeletons in the Snow
After a recent storm, I p...
Save the Redwoods League Continues Logging the Sequoia Forest
Image: Giant Sequoias Cut...
Great Bonsai Drops and Burns in Mountain Home
The famous giant sequoia ...
King Arthur, the 9th Largest Tree in the World Perishes
The acrid sting of smoke ...
Sequoia National Park Announces Plans to Create a Tree Plantation in the Wilderness
Written by Kim Dicso Ima...
Looking for a New Home
I lost my home in the Cas...
╳