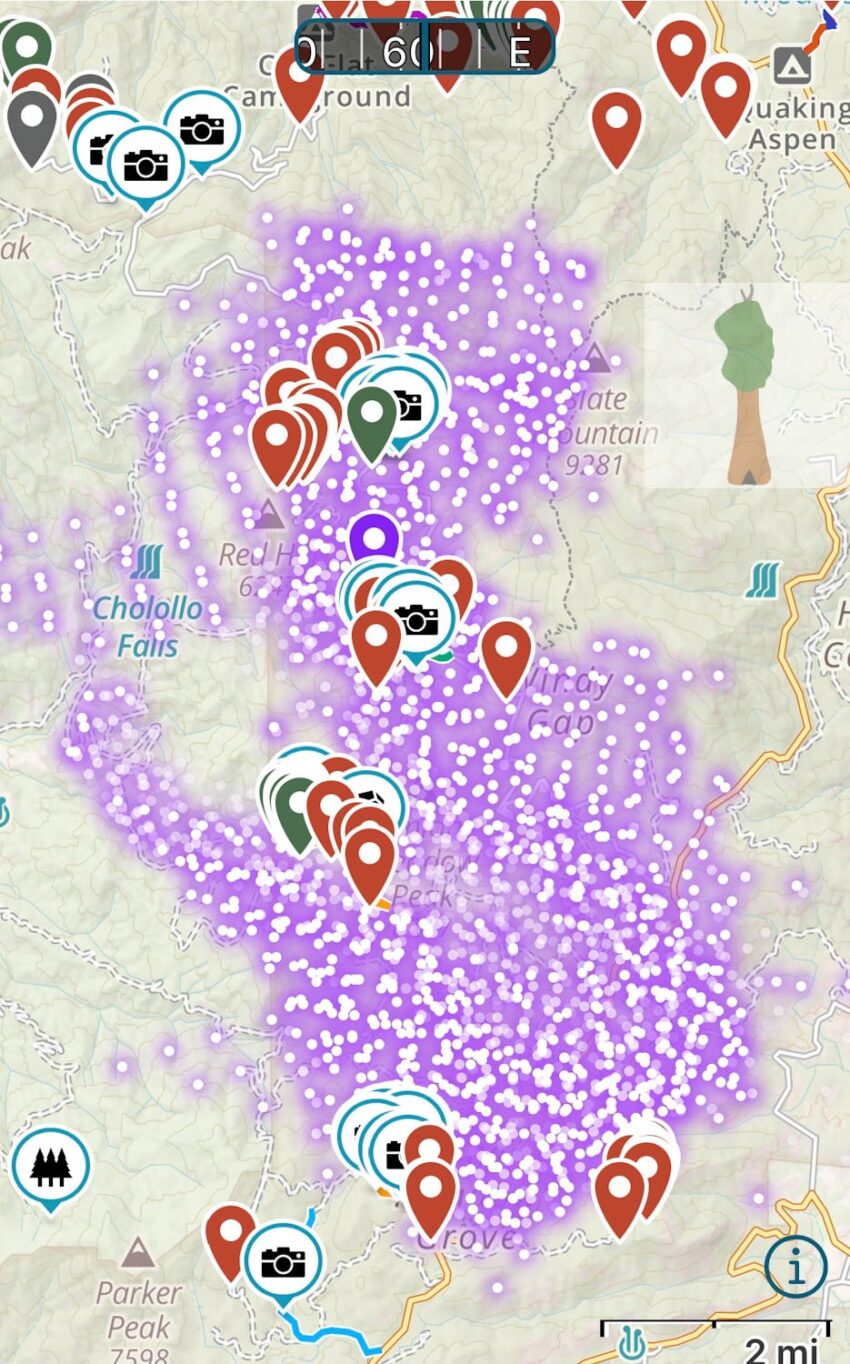 After the devastating Castle Fire last year, it was hard to imagine things could get worse, but right now, only a single year later, the Windy Fire and the KNP Complex Fire have taken over the tree apocalypse of our time.

Pictured: Satellite screen capture of sequoia groves burning in the Windy Fire. Top to bottom: Red Hill, Peyrone, South Peyrone, Long Meadow. The purple dots represent active fire. The markers are my waypoints from many hikes in the area. This was my playground. It was my joy. It was my life. Now this.

Preliminary reports of the fire’s impact on the sequoias are inaccurate. It’s far too soon to be making any announcements or judgements about the fire. All of the groves need to be surveyed first, not just some sequoias standing along a road. The media is capturing a few sequoias alongside a highway and drawing sweeping conclusions from it.

After the Castle Fire last year, it was reported as a beneficial burn. Of course we know now (largely due to my shouting about it) that it was so bad it killed a whopping 10,000 giants. After the fire, Forest Service reps saw some sequoias that were fine and drew a huge and wildly inaccurate conclusion from it, which was then repeated by everyone. (This has since been corrected).

These new fires are even more likely to be reported inaccurately. Most of the burn is out of view and closed off. The only two places that will get any sort of reasonable reports will be the famous named tree area of Giant Forest and the popular Trail of 100 Giants (a basin of big trees that’s part of Long Meadow Grove). Highways slice right through both of these groves. Also, Giant Forest was back-burned. Trees were foil wrapped. The sequoias there have the highest chance of survival. Giant Forest in particular seems to be all anyone talks about. There’s no mention in the media or reports about the scores of other sequoias on fire. We won’t know what really happened until someone like me actually goes in to look. And that will take time. The fire is still burning.

I have before fire images of all these groves (except of the two privately owned by the Tule Reservation). This includes aerial video in most cases. I will revisit the groves to compare the footage when permitted.