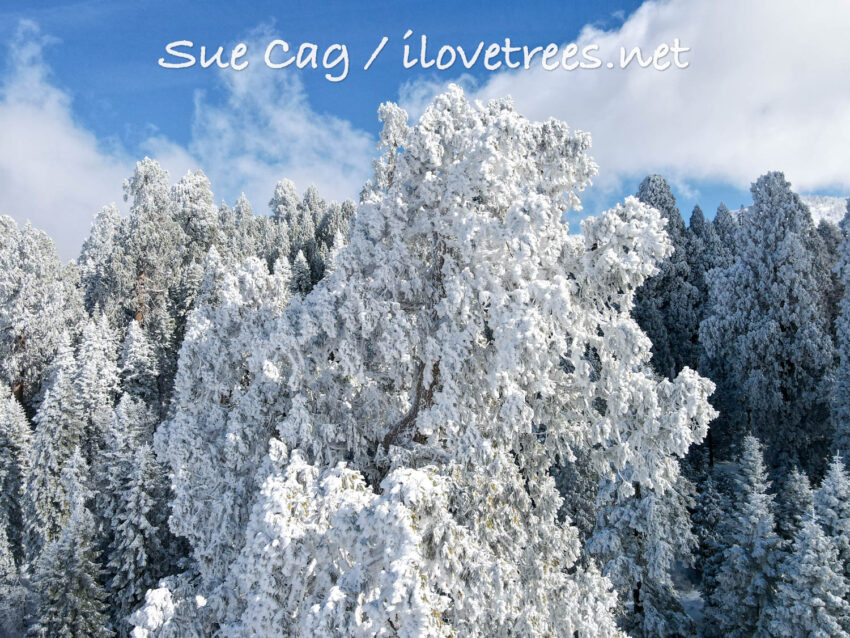 There’s nothing in the world like a giant sequoia wrapped in a majestic blanket of fresh snow. There is nothing so beautiful as frost clinging to foliage so tightly it looks like icing. Or layers of white falling softly on lofty branches that rise and disappear into clouds. Snow even rests on the trunk itself, revealing muscular contours of bark and bole. Winter is sequoia season, the time for snowpack to accumulate, the time for respite from humanity.

This year we haven’t gotten much, yet. By my crude measurements, approximately five feet of snow has fallen so far this winter. That’s not a lot. And it has already melted away. Snowpack is supposed to stick around until summer. And we should be closer to 20 feet by this time. Last year was a dry winter too. The year before that we got around 14 feet, which was good, but not enough of a trend for the trees. We need snow. Lots and lots of snow. We need a less hot and dry planet for these trees to survive. Let’s collectively try to manifest heaps of snowpack. In the 1930 book, Big Trees of the Giant Forest, George Stewart wrote that there can be up to 25 feet of snow surrounding the base of a giant sequoia. Let’s bring it back!

On a personal note, more snow means more very-much-needed-peace for yours truly. Southern California Edison can’t keep up their clearcutting while it’s snowing, so winter weather provides a little break. The chainsaws and loud booms rattle my nerves, especially when it comes from my old street, and from my former home in ashes.


Here is a series of videos from the past few weeks. Except for the Stagg Tree and the Waterfall Tree, the names of these sequoias are not widely used. Actually, I made all but one of them up. Of course, naming sequoias seems a little silly and perhaps disrespectful to such majestic beings, but for me, it’s necessary. I need names in order to refer back to individual trees. For instance, when heading outside, I might say to my partner, “I’m heading up to see Blueprint” and she would know exactly where I was going. It’s a lot more efficient than saying “I’m heading up to the giant sequoia with the straight trunk and perfectly formed branches that look bigger from side-slope.”

I steered clear of burned areas in order to show the absolute wonder of the surviving sequoias. We need to do more to protect these trees. Giant sequoias are rare, covering very little ground on our planet. Their aggregate footprint is smaller than any regular city. After the 2020 SQF Complex / Castle Fire, their acreage has been further reduced. Please raise awareness about severe wind-driven fire. Unlike the regular surface burns of yesteryear, this sort of extreme fire we are seeing more and more of kills these gigantic trees. Please do anything you can to support efforts to keep carbon in the earth. Spend more time outdoors. Learn. Plant trees. Inspire others. Let’s return to a less hot and dry world, one where both giants and humans thrive.

NARUTO
Naruto (not one of my names) is a big tree just off the side of a road that nobody pays much attention to, not that the tree minds, at all. Like most sequoias, it looks bigger the closer you get to it. This includes the canopy. Flying into the canopy is insanely amazing. There is so much going on up there, including massive “y”-shaped branches, and a top teeming with new limbs and leaders growing up from an ancient break.


ICING
I noticed Icing’s glorious treetop during my first full winter spent in the sequoias. Snow loves to cling to this big tree. Long limbs stretch out on each side in a welcoming gesture that beckons you to look closer.


CAT EARS
When my partner and I first spotted this tree from afar, we could only see the top of it; two green conical foliage shapes that looked like cat ears. Despite trying to provide a more suitable title, the name just stuck. We visit this tree often because it’s located in an area where no one else goes. This tree survived the 2017 Pier Fire, but endured damage from a back burn.


BLADE
Blade is so named because of a series of needle-less, pointed limbs that shoot up sharply. Blade stands straight and tall in a man-made clearing. It is one of the only (unburned) sequoias in the Alder Creek Grove with noticeable brown foliage. The lichen-covered dead wood at the very top bears a striking resemblance to the famous Stagg Tree.


SILENT MAJESTY
Silent Majesty is hidden in plain sight, standing majestically silent and unnoticed. It’s also a survivor. The big tree weathered both the 2017 Pier Fire and the 2020 SQF Complex / Castle Fire. It’s one of the few remaining sequoias alive in the area where it stands. An ancient fire scar adorns the side of its trunk, which is now freshly blackened. A new small “fireplace” or ashy cavern on the upslope side provides winter shelter and middens for critters – tiny paw prints lead to and from the opening. The tree’s limbs are huge, but the treetop and upper foliage look a bit worn and scraggly, likely from becoming too dry.


STAGG TREE AND WATERFALL TREE
The Stagg Tree needs no introduction. In case you forgot, it’s the 5th largest tree in the world. Miraculously, it was not impacted by the 2020 SQF Complex / Castle Fire, but its neighbor, the also famous but lesser-known Waterfall Tree, did not fare so well. Waterfall Tree’s trunk and roots extend far down an abrupt edge above Alder Creek. The bole is super thick and impressive. The crown used to form a peace sign at the very top. It’s a burned out remnant now. The tiniest bit of green still clings onto dead wood. It’s hard to watch the giants continue to be reduced in the still smoldering fire.


AVALANCHE
I nearly broke a leg trying to get down to Avalanche, but this is nothing new. Sequoias tend to grow on steep slopes and a sometimes painful effort is the price I pay for the privilege of meeting them. This modest-sized giant with a scraggly top stands above the site of an old avalanche. The earth abruptly drops away and forms a runway downslope. The tree’s roots stick out into open air off the side of the cliff, weathered and gray. The upslope side of the trunk was recently blackened by the 2017 Pier Fire, or the back burn. Scores of dead conifer snags clutter the dry slope around it, along with numerous oak trees. One sugar pine struggles to persevere close by. A few young sequoias, progeny perhaps, grow below and across from the tree. There aren’t many nearby giants; a sequoia I call Edge stands upslope, and there’s a slightly more distant area called Train-wreck where a massive sequoia fell last winter and another huge sequoia with a spear-top leans uncomfortably.

Freeman Creek Grove during the Castle Fire
I walked the entire Freem...
RIP: The Great Bonsai Tree - One of the Most Remarkable Trees in the World
We lost the Great Bonsai ...
Sequoia National Park
I have visited Sequoia Na...
Patriarch Tree Destroyed in the Castle Fire
DISCLAIMER: This forest i...
Giant Sequoias on Fire in the Alder Creek Grove
Dramatic 4K aerial footag...
Forgotten Grove: A Tale of Two Sequoias
There's no easy way to ge...