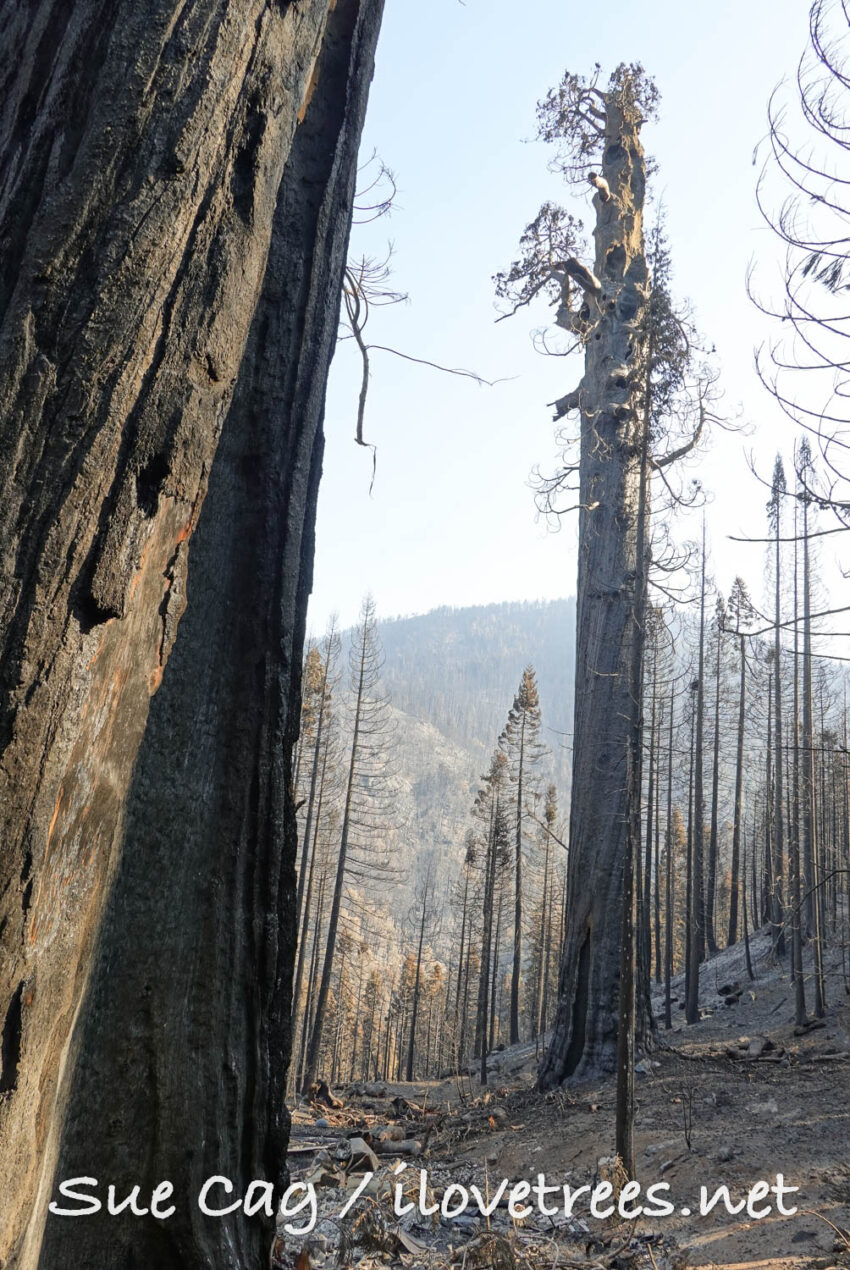 I went back down Fox Farm Road (Sonny’s Road/Escape Route) and descended the road toward Webb’s this time. To put it plainly, the entire forest is dead. There isn’t a single living shrub, plant, or tree anywhere. Giant after giant sequoia stand, branch-less and broken, like skeletons in a graveyard. I walked down to Webb’s, then across an old Forest Service road, up to an area of giants I am (was) familiar with, then back up via 20S03. For three and a half miles I saw dead giants, one after another, after another, after another. In all my post-fire grove wanderings I have never seen anything like this. There are no words that can adequately express the magnitude of this loss.

I parked by the Forest Service gate which is closed and locked. There are dead trees all around the clearing, crisped through by the heat of the fire, with the exception of one giant survivor soaring into the sky just south of the gate at the fire’s edge. I took a picture of the colorless smaller sequoias and incense-cedars at this spot to use for comparison at a future date. They all appear to be fried. The tree-cutter (arborist) who works for Edison would insist with absolute certainty that they are all dead, just as she did with all of the trees on my property, which they are clear-cutting at this very moment. Hopefully they will leave these and allow time to tell us what will happen here.

I headed down the road toward Webb’s house. It’s a long stretch leading across private property in the western section of the grove. Dead giants appear immediately. White fir snags are still on fire, billowing smoke from their snapped-off tops. Acrid fumes fill the air. Luckily, my N95 mask was doing a good job filtering it.

I’m not sure what I thought was going to happen heading down this way. I guess I thought I would see some dead trees, but also something green, something still alive. But there was nothing. Nothing at all. I looked up at dead giant after dead giant, and all I could do was utter, “no, no, no.” It reminded me of my car accident last year when time seemed to slow as I watched the other car flying toward me and braced for impact, knowing I could do nothing to stop the horrible thing from happening.

After surveying the once-grand sequoias around Webb’s cabin, I continued across an old Forest Service road, now clear of shrubs. Wendell Flint’s “Pink Forest” is entirely gone. Every single pink-barked sequoia is dead. There isn’t a single living tree, sequoia or cedar or fir or oak. It’s all completely gone. I’m glad Flint is not around to see this. (His Window Tree on Redwood Drive is also gone, as is the bulky one right across from the escape route. And his large perimeter tree I call “Pedestal” is heavily damaged).

At this point I know the trees by name. They are like friends to me. All I could do was cry as I looked upon one after another, each one broken, branch-less, and burned to death. The area I called “Grove Garden” because it was so lush is burned up. A tree I called “Arms and Arms” because of its many huge outstretched limbs is dead. All the big trees along the road are dead. A huge sequoia I called “Jack” because it had a big burl with a jack-o-lantern-like zigzag mouth on it is demolished beyond recognition. I took drone footage here recently, which will now serve as a memorial. (I’m still not allowed to fly right now because of the “authorization zone” prohibition currently in force over the area).

Finally, I walked back up via 20S03, riddled with exhaustion from the stress of seeing so many dead sequoias. I can’t even believe what I saw, not in the moment or even right now as I write this. I can’t believe the fire was this thorough. It killed every sequoia it touched in the western section of the grove. I want to return to count these trees, and honor them, but I’m not sure how much time I can spend down there and still be able to make it through the day. It’s truly horrible.

Sequoia National Park
I have visited Sequoia Na...
Giant Sequoias in the Snow
There's nothing in the wo...
Patriarch Tree Destroyed in the Castle Fire
DISCLAIMER: This forest i...
RIP: The Great Bonsai Tree - One of the Most Remarkable Trees in the World
We lost the Great Bonsai ...
Alder Creek Grove Aerial Video After Fire
This is an aerial video o...
Board Camp Grove After the Castle Fire
Board Camp Grove was anni...