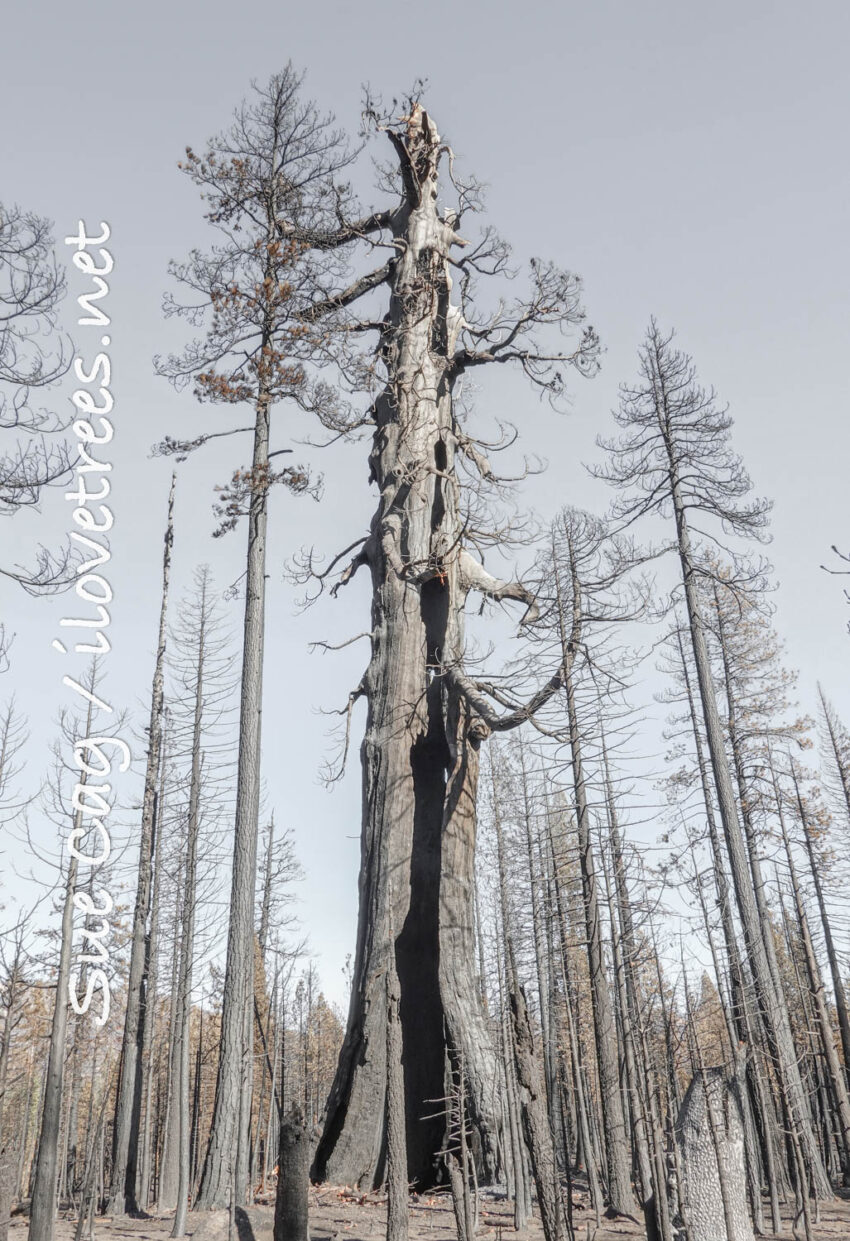 I walked the entire Freeman Creek Trail “after” the SQF Complex / Castle Fire. I also went off-trail in the southeastern section of the grove. While there’s significant damage along the trail itself, the forest is still surprisingly green. This is in stark contrast to the southern section which was completely annihilated. Most people stick to the trail and likely won’t see the extent of the devastation, but just a few steps off-trail countless giants have been reduced to char and ash.

My goal was to check on Great Goshawk, a gigantic tree I’ve marveled at before and perhaps the largest tree in the grove according to Wendell Flint in his book To Find the Biggest Tree. To my great disbelief and delight, it’s still alive, at least I think it is. The giant lost many limbs, but at the time of my visit there was still green up top. I can’t say for sure that the big tree is fine since sequoias can continue to burn inside for months, long after they seem ok.

Unfortunately, all of the other trees that Flint describes on the way to Goshawk are dead. The Ride Through Tree is especially horrible looking, its ghostly skeleton left behind, towering grotesquely over a lifeless landscape. The Telescope Tree is gone, as is the one with the “peculiar top,” and the nearby sequoia pair. The entire area is a horrible moonscape.

The forest continues to actively burn despite it being November, more than two months “after” the main fire. Plumes of thick smoke block any further progress into the southern section of the grove. While meandering back I hear a giant break and fall. The sound is very different from a tree naturally falling in dense woods. The sound is more metallic, sort of like a big shipping container dropped from a great height crashing on hard ground.

I didn’t have time to venture into the northern part of the grove (north of the trail), but I know that it burned horribly. I’ve seen the fire severity map, and I could make out several dead tops when I tried to get a view up that way.

It has been well publicized that the famous George Bush Tree was not impacted by the fire. Fortunately, crews came and cleared out the large tinder piles they had cut and left right beside the tree. The immediate area burned in a patchy manner, with some nearby sequoias damaged or killed, but most unharmed. Fire did climb a fir tree standing right next to the trunk of the George Bush Tree. The needles of the famous tree are now seared brown on that side, but luckily the fire ladder didn’t start a more damaging crown fire.

Great Bonsai Drops and Burns in Mountain Home
The famous giant sequoia ...
Alder Creek Grove after the SQF Complex / Castle Fire - October 27, 2020
I only had an hour or two...
Waterwell - A Giant Sequoia Destroyed by the Castle Fire
Before and after aerial f...
2020 Castle Fire Recap: One Year Later - Complete Grove Conditions
Updated: October 30, 2022...
Sequoia Skeletons in the Snow
After a recent storm, I p...
Alder Creek Grove (and Sequoia Crest) "After" the Castle Fire - October 11-16, 2020
My home burned down on Se...