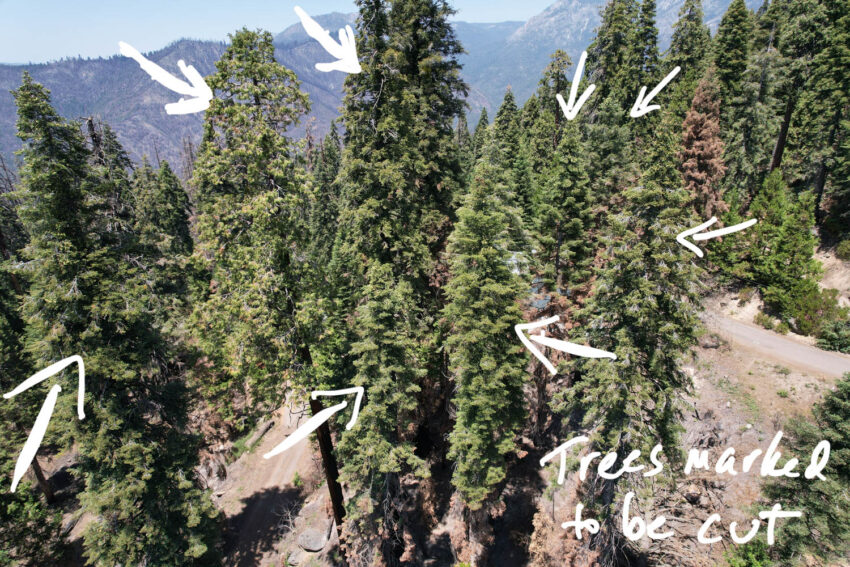 Update and Correction 8-11-21: KMPH uncovers documentation showing the state is paying the company Forgen over $183 million dollars to clean up 820 lots. That’s over $223,000 per homeowner! Each person could have cleaned up their parcels for a fraction of the cost AND had a large chunk of change left over to purchase a new home.

Tulare County and Cal OES* are cutting down scores of living green trees under the guise of “disaster cleanup.” Wildfire has been a boon for the county and state, with seemingly infinite FEMA dollars up for grabs. Homeowners and landowners were convinced to sign ROEs or “right of entry” forms that allow entry onto private property for debris removal. It sounded good at the time, despite lack of defined scope and sketchy anti-lawsuit wording. But before finishing the removal of burned houses and any dead trees in the area, crews began clearcutting entire slopes of green trees. Blue paint suddenly donned countless trunks of white fir, incense-cedar, sugar pine, and even giant sequoias, with numbers indicating the trees would be cut down.

Crews began cutting these trees as quickly as possible, which resulted in a huge community outcry with numerous residents revoking their ROEs. When both Tulare County and Cal OES representatives were asked why green trees were being cut, they couldn’t come up with a good answer, instead saying that the trees could possibly die within five years, a seemingly random criteria that no one agreed to.

Clearly, wildfire cleanup is big business and property owners have no say. When I personally called to ask why trees were being cut against an owner’s wishes, I was told “the ROE states that we can take whatever we want.” Tulare County is even threatening people who refuse to sign their contract with tax liens, stating that they will cut the trees anyway, without permission, add it to the owner’s tax bill, and seize the property if unpaid.

When asked about the wanton cutting at a community meeting yesterday, Dena Wilson, the South Branch director for Cal OES, told homeowners: too bad. “I will refer you back to the ROE. The government has the sole discretion.” It isn’t enough to have suffered through this horrible fire. Now residents have all their rights stripped away as well. This is a major lawsuit in the works. And an egregious misuse of our taxpayer dollars.

Press has been coming up to the community of Sequoia Crest to cover what’s been happening. Fresno station KMPH interviewed several residents and aired the story during the July 22nd, 2021 evening news. Read the news report and watch the video here. Fraud is occurring in all areas impacted by the Castle Fire.