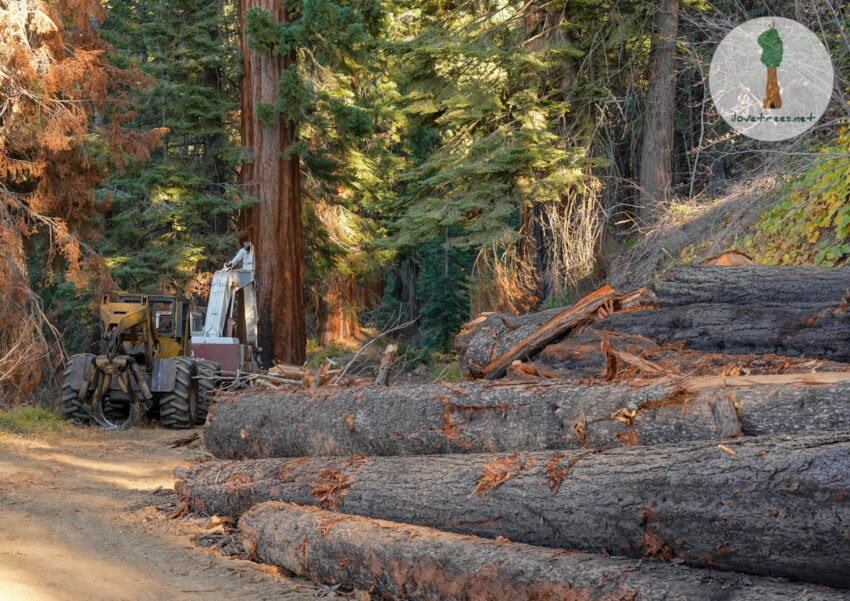 Image: Giant Sequoias Cut Down by Save the Redwoods League

November 16, 2022 Update: Save the Redwoods League is currently lighting burn piles on fire and will continue to do so for weeks. There is absolutely no benefit to this malicious activity (the area just burned), only numerous downsides. They are indirectly killing more trees by deliberately and unnecessarily increasing climate change. They are directly burning sequoia seedlings to death. They are unnecessarily increasing wildfire risk. They are causing awful air pollution with thick smoke. On a personal note, it’s like having someone chain-smoking inside my house. It’s horrible for my asthma. My eyes and nose are stinging and I can’t sleep due to intense overnight burning. I can only speculate on how the tiny lungs of songbirds and wildlife are faring. Why is SRL causing these problems? The popular theory is so that they can PR-spin this to get more money from donors, as though they are doing something good for the forest instead of what they are actually doing, which is destroying it. Dear duped members: remainder logs and debris can easily be given away or chipped. Fire-adapted forest recover. There’s no reason for any of their malicious activity.


Save the Redwoods continues its logging operations in the Alder Creek sequoia grove. More roads have been cut. More trees are marked, including sequoias. Sequoia seedlings are being bulldozed by the thousands. Birds were killed during their active breeding season.

Where is this happening?
The major clearcutting is in the southeastern portion of the grove owned by Save the Redwoods League. More cutting is happening throughout the northwestern portion of SRL land, as well as at the end of Chinquapin Road and at the top of FS Road 20S03. Most people who visit Alder Creek only go to the Stagg Tree which is located in the northeast corner of the grove. Trees are marked in that general area for future cutting, but the current activity is happening largely out of sight. To see it for yourself, start at the south end (upon entering Sequoia Crest) and head east at an obvious neighborhood clearcut. Here are coordinates:
Largest clearcut: 36.18075, -118.62573
More sequoia seedlings being destroyed: 36.18421, -118.62862

Here’s a quick list of what’s not right about Save the Redwoods activities:

– Logging an ancient sequoia grove repeats the tragedies of the past and shows how little we’ve learned from past mistakes.
– ALL of the natural sequoia seedlings are being destroyed (along with all other conifers). The League plans to build a tree farm instead of permitting natural seedlings to flourish as they would if SRL wasn’t logging their land.
– At first only dead trees were being cut, but now both living and dead trees are being cut, including sequoias.
– Logging increases climate change by disturbing the carbon sequestered in these trees.
– Logging directly increases temperature *heat* in a world already too hot by removing the trees that are filtering the hot sun.
– Logging directly increases drought by removing trees that add moisture and shade and causing the soil to dry out because it is fully exposed to the sun. Also, a ton of moisture is held by logs on the ground which have all been removed.
– Logging a fire-adapted forest post-fire doesn’t make any sense. The forest tended itself and will recover just fine on its own and in its own time, despite our hubris.
– Increases runoff – trees are no longer there to hold water on steep slopes so it washes away, leaving none for any remaining trees or new growth. Landslides may also occur.
– Increases wind due to the removal of natural windbreaks. Wind drives wildfire. Wind increases the speed of fire and causes severe burns. Remove trees and the fire moves faster and burns more intensely.  No more “low and slow” fires of yesteryear.
– Roads are built and all corners of the forest are bulldozed, stripping and compacting the soil.
– Logging destroys the forest ecosystem which will never return as it once was.
– Logging destroys all wildlife habitat, including bear, mountain lion, bobcat, coyote, fox, deer, peregrine falcon, goshawk, grouse, quail, and spotted owl habitat (all of these animals are or have been present in Alder Creek).
– Birds are being killed, their nests falling to the ground with baby birds inside, as the trees are cut down during the active breeding season.
– May be replanted using foreign seedlings which will forever alter the genetics of a rare and endangered forest.
– A tree farm is not a forest.
– Wastes water in a drought-stricken area to force artificial seedling growth.
– Assumes plantings will survive long-term despite being located in an area that is too hot and too dry.
– Completely distracts people from addressing climate change, which the only thing that will actually help the sequoias and all of our forests.