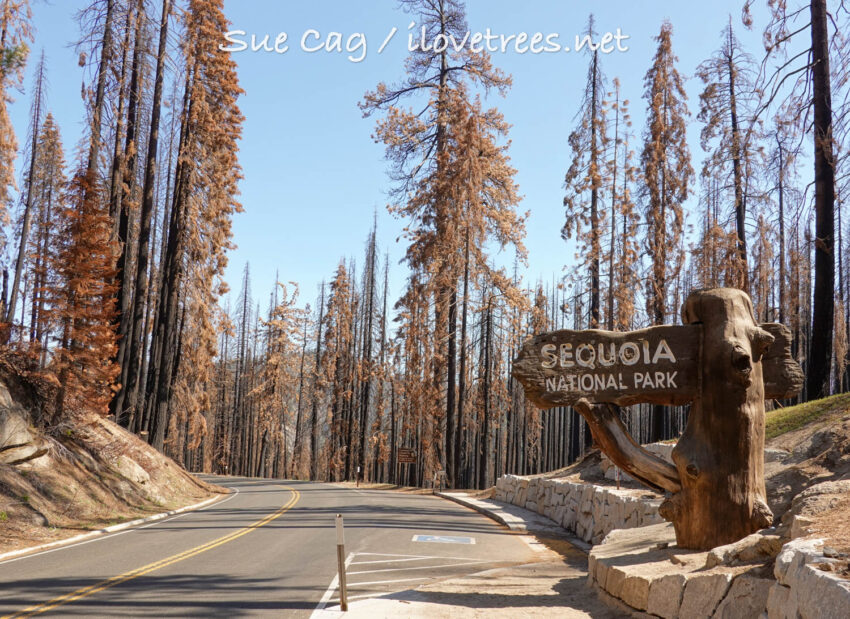 I finally took a drive through Sequoia National Park for a brief glimpse into the impact of the KNP Complex Fire. I didn’t feel the need to document this fire as much as the Castle Fire or the Windy Fire since the park did a decent job of releasing information.

A severely burned area surrounds both sides of the highway shortly before reaching Redwood Mountain Grove. It’s shocking at first, even though I know it’s coming. At the Redwood Mountain overlook, there are still scores of green domes in view on the ridge to the right and ahead. The dirt road down into the grove is closed of course, but I could see green sequoias along the portion in view. There are a few brown domes and a split sequoia upslope, closer to the highway. Looking farther into the canyon, I notice a great many skeleton sequoias and brown tops. Hundreds of them. There are severely burned areas on both sides of the canyon. Perhaps the worst area is closer to the Buena Vista side. I could see this better from a pull-off farther down the highway. Visibility is poor since the air is (as usual) very polluted and hazy. The trees are also still smoking.

Continuing on, the burn is patchy for a while. Then I come across a new Sequoia National Park entrance sign right smack in the middle of a severe burn. There’s a new pull-off next to it, flanked by a retaining wall of white rock. But the entire surrounding landscape is a horrible expanse of burned up trees. It’s honest I guess, so there’s that.

Lost Grove looks good, a little black in spots, but seemingly unchanged. I spot a few Muir Grove giants on top of their ridge. They look intact, but a few may be brown. Visibility isn’t good though and there’s no place to stop to get a better view. Muir Grove is supposedly ok except for sections near the edges. Dorst Campground and the trail are closed, so it may be a while before we get a full picture.

I find a hazy view of Suwanee Grove from the highway. The entire forest from above the road all the way down through Suwanee is burned up. It’s a large area, and it’s bad. It’s also strange to be able to see the grove from the road (if you know where to look). I use binoculars to cut through the haze for a better view. I see numerous brown sequoias and skeletons. I also see seven green tops in there, but I don’t know how badly burned their bases are or if they are actually ok. I don’t want to get too excited about the possibility of survivors since sequoias often flush out and then die years later. I need to go down there on foot. The forest is still smoking. The smell is very strong, especially at this point. It breaks my heart to see the dead sequoias in Suwanee. I had just revisited them a few months before the fire.

Numerous trees have been cut down throughout the burned areas and more are marked to be cut. We’re probably going to see a lot more senseless logging of burned areas in the future. I don’t know how this idea got started – that we need to go into fire-adapted forests to log them and then go about planting them as though these forests won’t regenerate on their own. It’s a tragedy that may be worse than the fires themselves.

The terrible burn continues almost all the way to Wuksachi (which is fine and looks a bit like a green island). The burn also extends down the canyon toward Giant Forest in a patchy manner. A nice green expanse follows after this though, along the drive toward Lodgepole and into the Giant Forest (with only some brown trees beside the road). The main Giant Forest section appears unchanged. Fire effects continue after passing through the busy tourist area. While driving through without stopping, I notice 6 dead (mostly split in half) and 4 significantly damaged sequoias. It looks like the fire clipped the southwest portion of the grove. There are likely several more casualties hidden out of sight.

On the long twisting route exiting the park, I notice swaths of foothills in view that were scorched to nothing – little nubs of manzanita or oak on bare hillsides as far as the eye can see. The severe burn continues up all the ridges in view. As you get closer to Three Rivers, all is green again.

For me, Sequoia and Kings Canyon National parks used to be a haven for the most natural forests in the Sierras. I felt like I could breathe for the first time when entering their verdant trees – thick white firs dotted by fluorescent wolf lichen, orange sequoia-like “imposter” incense-cedars, tall sugar pines with outstretched branches, puzzle-piece barked ponderosas, and finally, the ridiculously massive giant sequoias. But, as soon as I slip into the National Forest areas, this changes, often dramatically. The forest is cut up and trampled. We’re left with shrub fields, plantations, and small trees trying to make a go of it after severe logging. It’s much more hot, dry, and exposed. Logging and grazing roads zigzag all over the landscape. This year there are hundreds of logs all over the ground from the Quail Flat area down through the road to Hume Lake. The Forest Service cut down countless trees and left their remains on the ground. It looks terrible. They also cut down scores of trees in Bearskin Grove and left logs all over the place. The east side of the first dirt road used to look like a tiny pocket of real forest (at least it did during my last visit five years ago), but now it looks like an awful mess. I could see the beginnings of the park starting to look like this now too. It seems as though more and more organizations (and most people) are being misguided by the Forest Service (not that this is anything new). I can only assume that all of our forests are going to look even more unnatural and marauded in the future, not to mention burned beyond recognition because no one will address the real issue: climate change.

See Sequoia Loss in the 2021 Windy and KNP Complex Fires for a summary of the impacts in each grove.

Save the Redwoods League is Logging Alder Creek Grove
Go to update: June 20, 20...
Sentinels in the Mist: A Walk Through the Coast Redwoods
I don't know where to loo...
Windy Fire Firsthand Report: Starvation Creek, Deer Creek, Packsaddle, Long Meadow
Featured Image: The view ...
Yet Another Giant Sequoia Burning in the Alder Creek Grove
UPDATE: This giant tree s...
The Joyce Kilmer Memorial Forest
It's not easy to find old...
Alder Creek Grove Aerial Video After Fire
This is an aerial video o...