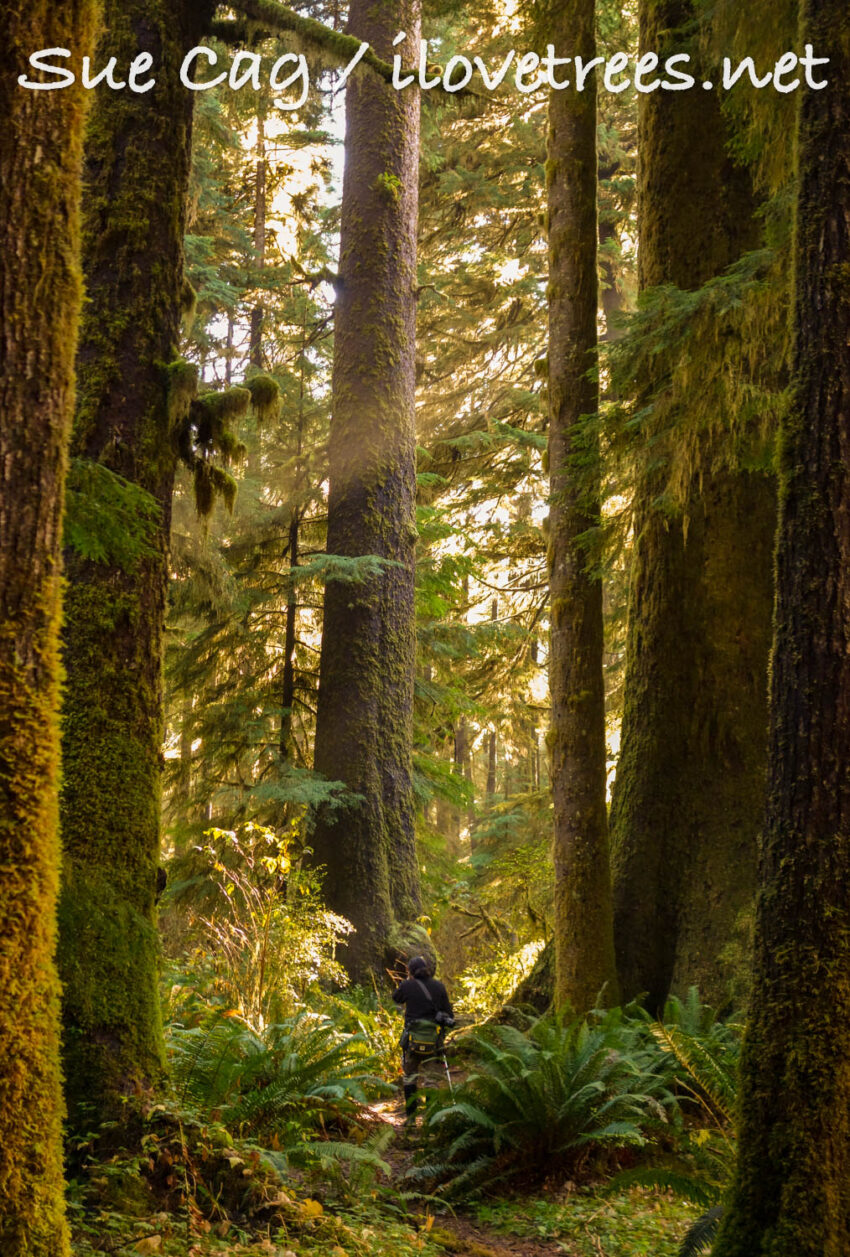 Journey Into the Primeval

Large pieces of gravel and rock pinged against the underside of the van. I swerved to avoid the larger obstacles and braced for the smaller ones. We had been in the car for six hours, driving 25 miles per hour on the better stretches and less than that the rest of the way. Our conversations consisted largely of yelling over the constant rattling of metal meeting washboarded road. Every once in a while we pulled over to make sure we hadn’t lost any pieces of the car. Perhaps this trip was a mistake, but we were in too deep now to turn back. At the end of this winding mess of roads we hoped to find paradise.

Most of the last patches of old growth are somewhat hard to get to. They have to be, otherwise these forests would have already been cleared. Sure, there are singular giants who are easily accessible and impressive in their own right. But these trees are not forests. In fact, solitary survivors are just as much a testament to the destructive nature of humans as the clear-cuts. There these sentinels stand, often only a small fence separating them from asphalt, with no other big trees nearby. They’re large and lonely. And they’re a reminder of what had once been. So many lonely giants stand as monuments erected by self-congratulatory logging companies, as if leaving one giant behind somehow excuses the acres and acres of old-growth decimation that occurred.

True old growth forests are rare and tucked away. Ironically, the only way to get to some of these pockets is by driving the logging roads carved by those very people who are responsible for the mass destruction.

Carmanah Walbran Provincial Park is one of these extremely hard to reach pockets of old growth forest, especially for two American east coasters. We drove several days across the United States, crossed the Canadian border near Vancouver, and took a ferry to Vancouver Island, at which point we were faced with the arduous task of navigating many miles…I’m sorry, kilometers…of logging roads.

We did all of this in a mini-van, essentially our home on wheels. We stocked our makeshift camper full of food and water and even built a cushy platform bed inside so we could sleep anywhere from Forest Service roads to truck stops. And we did. However, with the luxury of having a tiny house on wheels came the cost of driving down dangerous roads in a vehicle designed to toodle along the well-paved roads of suburbia.

We drove for an entire day through the arterial labyrinth of what foresters love to refer to as the “working forest”. Not only were we driving through what felt like a minefield of large rocks, often having to pull over for logging trucks coming through, but the scenery was downright bleak.

Clear-cuts are ugly. Nobody I have ever met has disputed the unsightliness of these denuded hillsides. Pretty much the entire drive was a study in how the land looks in various stages of the logging process, from freshly cut stumps to barren land that looks like it will never host any kind of life again. There were some areas that had been replanted, but there was a whole lot more cutting happening than growing. We passed truck after truck, all of them brimming with trees.

We were reaching the point when daylight was fading and we had started to question whether there even was a park at the end of this road maze when we arrived at the sign hidden behind shaggy understory. The parking lot was completely empty. The air was moist and quiet. And we were surrounded by trees, an oasis of hope in the middle of an environmental apocalypse. No artificial light impeded our view of the stars, no highway noise stifled the night songs of the forest.

The next morning we set out early on a gravel path that descended steeply into a lush stand of Sitka spruce and western red cedar. Around every corner was another amazing old giant, and the sun was dancing through lichen-drapped boughs, begging us to take pictures that essentially took themselves. Dewdrops and a dozen different kinds of moss glimmered. Banana slugs sunned themselves on logs and moss beds.

At the end of the first trail was a short boardwalk and wooden platform that offered an opportunity to see and touch a trio of giant Sitka spruce, the Three Sisters. Being allowed close access to trees that are hundreds or even thousands of years old is a sensory pleasure. The bark is gnarled, the trunk thick, and the tree itself seems to emanate the energy of a wise elder. The flip side of this access is that the bark also begins to get worn away after being touched by millions of adoring fingers. The roots become exposed after years of trampling. The platform is an attempt to allow admirers to get close to the trees without climbing all over the trees themselves.

At the other end of the trail we found the Stoltmann Grove (formerly called the Heaven Grove) of Sitka spruce. The grove was renamed in 1995 for Randy Stoltmann, a young environmentalist who made it his life’s work to find and protect large trees in Canada and the northwestern United States. Carmanah Walbran is one of the places he fought hard to preserve. Unfortunately, like many of the large trees he so admired, Stoltmann died before his time.

The guardian of the Stoltmann grove is The Heaven Tree, a stately Sitka spruce that also has a viewing platform. My partner Sue was thoroughly enamored with the mossy majesty of this matriarch. The rest of the Stoltmann Grove consisted of several large spruce trees, two of which were labeled as exceeding 250 feet in height! Although there used to be a way to continue on to reach the Carmanah Giant, another monstrous spruce in the Carmanah Valley, the trail now comes to an end in the Stoltmann Grove. While the boardwalks and platforms are well maintained, it seems like nature has begun to take back more and more of the park.

In May 2016, about six months after our visit, sections of the trail were closed due to flooding on the Three Sisters side and “tree hazards” on the Stoltmann Grove side. The trail now ends well before the Stoltmann Grove itself, due to some of the older spruce trees’ instability as they start to succumb to old age and forces of nature. And this, perhaps, is the greatest tragedy of these small preserved areas. Nature continues to do her usual house cleaning, as she should, taking trees and cleansing herself through storms and fires as well as old trees simply coming down due to old age.

When we preserve these small pockets of wonderment, we think we can do whatever we want elsewhere; we assume these “saved” areas will be there forever so who cares about the rest? But storms and floods happen and trees die. The large old spruces are going to die and there are none to replace them. Just as the Cathedral Grove in Connecticut, one of the east coast’s last patches of old growth pine and hemlock, was severely damaged by a tornado in the 1980s, so are all of these old growth sanctuaries at risk. When the surrounding forests have been logged, providing no buffer for the remaining giants, these areas are even more susceptible to forces of nature as well as the simple passage of time.

It is too late to set aside any more old growth forest. But perhaps as the logged areas start to grow back we will consider allowing some of these trees to become the ancients of generations to come. In the meantime, I will drive a thousand horrific logging roads to pay homage to the few remaining primeval forests, the keepers of stories, the last survivors of another time and another earth.

About the Author:
Kim Dicso is a singer-songwriter, multi-instrumentalist, prosaist, hiker, traveler, vegan, and contributing author of nature writing for ilovetrees.net. Find her music at folkstar.net.

About the Photos:
All photos by Sue Cag and Kim Dicso. All Rights Reserved. Photos may not be used without permission.

Avatar Grove
Text and photos coming so...
A Winter Walk in Ev-Henwood Nature Preserve
No one else was visiting ...
Sequoia National Park
I have visited Sequoia Na...
RIP: The Great Bonsai Tree - One of the Most Remarkable Trees in the World
We lost the Great Bonsai ...
The Hilton Oaks
Hilton Park holds a tiny ...
King Arthur, the 9th Largest Tree in the World Perishes
The acrid sting of smoke ...