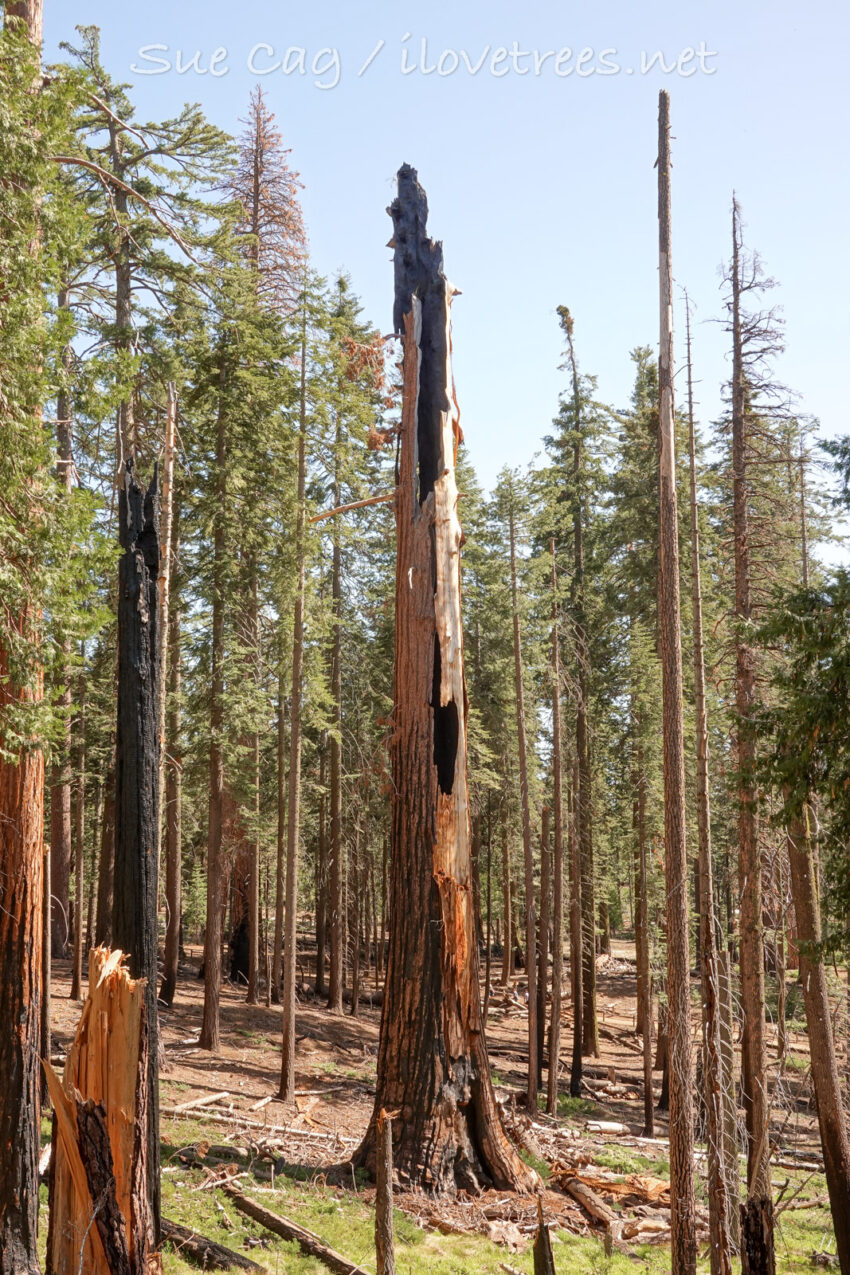 This is what we have to look forward to if the powers that be are permitted to further destroy our forests in the name of “management.”

Hearing a lot of talk about the “management” of our forests? As though they need our help? As though we haven’t caused all the trouble in the first place? Feel like you’re being told that we need to go in and rake even the most remote forest? Do you know where this idea originated? Are we being beaten over the head with it, stifling our critical thinking ability? Is this something that’s being forced on us by organizations with deep pockets, including our taxpayer dollars and donations?

These are fire-adapted forests. They need to burn. Let’s get that straight. When they burn severely though, everyone panics. Then something strange happens. Instead of addressing the real issue of why some fire-adapted forests aren’t faring well recently, we double down on what got us into this mess in the first place. There isn’t a single sequoia grove that hasn’t been impacted by logging or adjacent logging, grazing, and road building. There is no such thing as any forest (or any natural area) that hasn’t been impacted by climate change. So what do we do now? Log the hell out of the forest like we did before, creating further imbalance? That seems to be the party line of the Forest Service and Save the Redwoods League. But the problem is, we only have evidence that these activities are making things worse. If you’ve heard that cutting and burning are making things better, you’ve been misled.

I’ll admit, I used to believe this nonsense too. It was only until after I walked hundreds of miles through burned forests, that I realized that what I had been told was either missing information or downright wrong. Here are a few examples (among many more) of what I found.

Eden Creek Grove was full of debris, on the level that’s being mindlessly repeated in the press as “dense fuels” due to “fire suppression.” Yet, the 2018 Eden Fire burned the grove in its entirety and didn’t kill the sequoias. Similarly, Burro Creek Grove, another grove chock-full of debris, burned completely in the 2018 Alder Fire and yet, the forest is fine. (The Castle Fire tried to get into Burro as well). The 2016 Hidden Fire burned Maggie Mountain Grove and yet, no loss. The 2016 Meadow Fire burned all of Cunningham Grove, but again, no loss (and Cunningham “successfully” burned again in the 2021 Windy Fire). All of these groves were full of dense fuels before they burned. If a lack of “management” of these fuels is the issue, then why didn’t all these groves burn to a crisp?

Conversely, the 2021 Windy Fire killed almost every single sequoia in Deer Creek Grove and Starvation Creek Grove, respectively – two groves that had been intensely logged. The portion of Alder Creek Grove that was thinned two months prior to the 2020 Castle Fire burned severely, as did the recently logged portion to the west. Swaths of several groves that had been logged in the 1990s burned severely in the Castle Fire. Mountain Home Grove has been logged relentlessly (and still is), yet thousands of its sequoias burned to death.

What about controlled burning? The Sugar Bowl and much of Redwood Mountain burned down in the 2021 KNP Complex Fire despite having been purposely burned a number of times. During one past visit I sunk down to my knees in ash there. The Giant Forest has been burned countless times, yet crews had to work tirelessly to keep the KNP fire from burning it down (and several giants were damaged or killed along the southwest edge). Suwanee Grove had been prescribe burned, yet burned intensely, while untreated and extremely fuel-dense Oriole, New Oriole, Castle Creek, Pine Ridge, and Skagway groves (among others) mysteriously retain their green domes.

What about the millions of acres that burn severely that have no trees at all?

So why doesn’t cutting and burning prevent our forests from burning severely? The quick answer is that the severity of fire has less to do with trees, than it does with the weather, both during a fire and long-term. Favorable conditions during a wildfire means we get the kind of “low and slow” burn of yesteryear. But, this is more the exception than the rule these days – because of climate change. All of our trees, including the fire-resistant sequoias, are too dry due to the increase in temperature and resulting lack of snowpack. Nothing but addressing climate change is going to alter that. If we go in and cut and burn the forest, we’re only going to be stressing the trees more, and exacerbating climate change. This is what happened in Mariposa Grove.

I just visited Mariposa Grove last month. I was horrified by what I saw. I know the grove has a long history of overzealous “management,” but this was going too far. The park had done a ridiculous amount of cutting and burning. The burning had seared the protective bark off many sequoias, killing a few of them (and more will die later). The activity also caused 15 sequoias (and many other conifers) to fall to their deaths during a wind storm last year. When so many companion trees are killed, roots of the surviving sequoias are weakened, water accumulates to compromise them further, and the thinned forest experiences increased wind speed due to the removal of natural windbreaks. There is a precedent. The Forest Service killed 4 sequoias the same way at Trail of 100 Giants in 2011 and 2019, respectively – by overzealously cutting the moist basin there.

I saw countless blackened and dead conifers in the Mariposa Grove due to the park’s controlled burns, both still standing and on the ground. There were wide slopes densely covered by post-fire pioneer (and very fire-loving) shrubs. Another horrible, enormous swath at the south edge of the grove was deliberately burned to a crisp. It was awful to see this in a sequoia grove. We don’t want fire to take it, so we destroy it first?

Now the most “managed” sequoia grove of all is on fire. Forty million dollars were spent “managing” Mariposa Grove in 2018 and it’s burning anyway. Will we learn from this or will the powers that be spin it in such away that we stay asleep?

Note: We are (hopefully) unlikely to see sequoia loss from the Washburn Fire. It appears to be slow moving and lacks windy conditions.